Why is this Assam bureaucrat breaking the protocol?

Trying to keep “masters” in the corridors of power “happy”, it is surprising as to why the Assam DIPR Rajib Prakash Baruah breaching the set official protocol

Trying to keep “masters” in the corridors of power “happy”, it is surprising as to why the Assam Department of Information and Public Relations (DIPR) breaching the set official protocol.

The DIPR on May 24, 2018 published a document in Hindi – Parivartan, which highlighted the good works of Sarbananda Sonowal –led BJP government during the last two years in Assam.

One of the inside covers of the Hindi document had the list of Editorial Board of the publication by the DIPR. At the top of the list names of the two members of the Advisory Committee were printed. 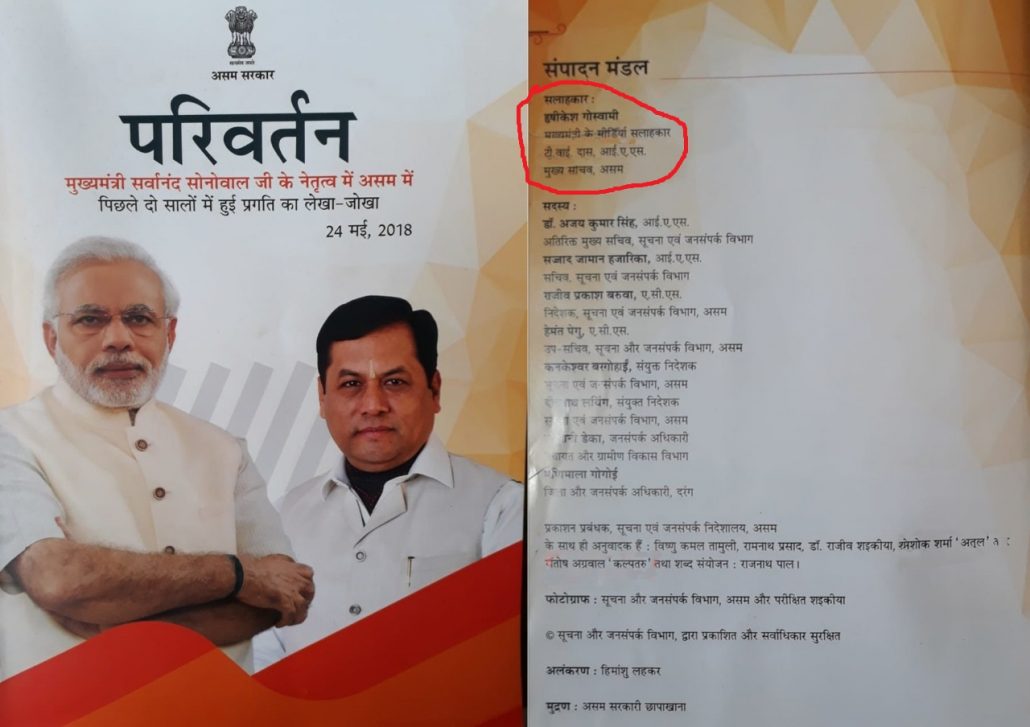 As per the notification (AAP 130/2016/6, dated August 2, 2016), by P.K. Barthakur, Principal Secretary, Personnel (A) Department, said that Hrishikesh Goswami, son of Late Surendra Narayan Goswami, was appointed as the Media Adviser to the Chief Minister of Assam in the rank of Secretary of Government of Assam.

The notification of Goswami’s appointment is available in the open source, and is enclosed with this news report for convenience of the readers. If Goswami is of the rank of a Secretary of Assam, it is surprising as to why the DIPR printed his name in bold, and that too, above the Chief Secretary’s name.

Though a senior Assam Civil Service (ACS) official, the Director of Information and Public Relations, Rajib Prakash Baruah, probably did not bother to follow the set Warrant of Precedence of the Assam Government, and thought pleasing Hrishikesh Goswami was important for him to get an extension of his service. Baruah is set to retire on September 30.

That Baruah was not following the Warrant of Precedence or the Blue Book, was more evident when the DIPR on Wednesday organised an official ceremony at the Assam Administrative Staff College at Khanapara.The ceremony was organised to distribute accreditation cards to about 160 journalists of Assam. While the programme started two hours behind schedule, it again breached the set protocol of the state government.

While six people were on the dais, Chief Minister Sarbananda Sonowal was at the Centre, and was flanked by Media Adviser Hrishikesh Goswami and Legal Adviser Santanu Bharali. On the other hand, the three dignitaries on the right and left corners were Additional Chief Secretary Kumar Sanjay Krishna and BJP MLAs Bimal Borah and Angoorlata Deka.

As per the Warrant of Precedence of Assam government, Bimal Borah and Angoorlata Deka, should have been allocated seats next to the Chief Minister by the host, Rajib Prakash Baruah. Even Additional Chief Secretary Sanjay Krishna deserved a seat closer to the Chief Minister.

Why is Baruah trying to break the set protocol? Despite several attempts, he was not available for comments. He did not receive his mobile phone.