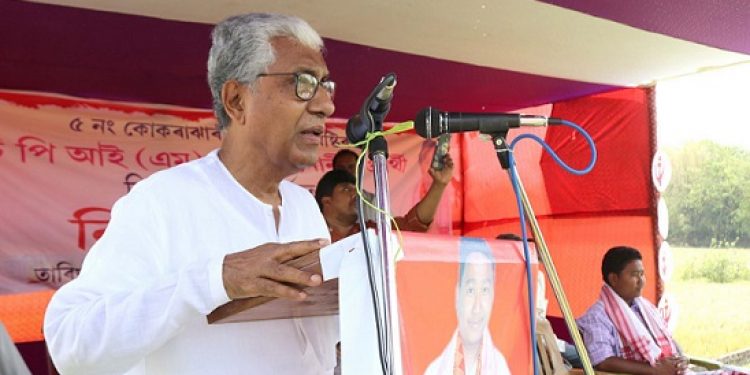 Former Tripura chief minister and veteran CPI-M leader Manik Sarkar on Saturday alleged that during the BJP-led NDA regime, efforts have been made to destroy democracy in the country.

Twenty-six-year old Biraj Deka is the youngest candidate fighting the ongoing Lok Sabha elections from Assam. Daka is the CPI-M candidate for the Kokrajhar parliamentary seat which will go to polls in the third phase on April 23.

Biraj Deka, a postgraduate in English literature from Bodoland University, is the vice president of the Assam unit of the Student Federation of India (SFI), the students’ wing of the CPI-M.

Referring to a statement of the Chief Justice of Supreme Court, Ranjan Gogoi, Sarkar said, “the situation of the country is such that the CJI, who is the pride of Assam and Northeast, has to say that now the apex court fails to work on its own.”

Sarkar also said the poets, story writers, filmmakers and intellectuals of the country have appealed to throw the BJP-led government out of power.

“The problems of the farmers have not been solved and instead of that incidents of farmers’ suicide have gone up. The Modi government, which came to power with a promise to provide employment, has forgotten the unemployed after coming to power,” said Sarkar.

Stating that the BJP gave only false promises, Sarkar said, “Modi promised to deposit 15-16 lakh in the account of each of the Indian citizen after bringing the black money. But the Modi government has failed to bring that money and also could not arrest anyone who owns it,” said the ex-Tripura CM.

He alleged that the BJP government has technically made arrangement to hand over people’s resources to the corporate.

“On the one hand, the BJP-led government has enriched the hands of the corporate and on the other hand, it has pulled up socks to create communal clashes. They want to destroy India. They have targeted all including writers, intellectuals, journalists, poets and litterateurs,” Sarkar further said.

According to information, Sarkar also addressed election rallies at Sorbhog and Bijni under Kokrajhar Lok Sabha constituency on Friday and urged the electors to vote for justice. He said it’s time to vote for the unemployed youth, struggling farmers, small businessmen and entrepreneurs.