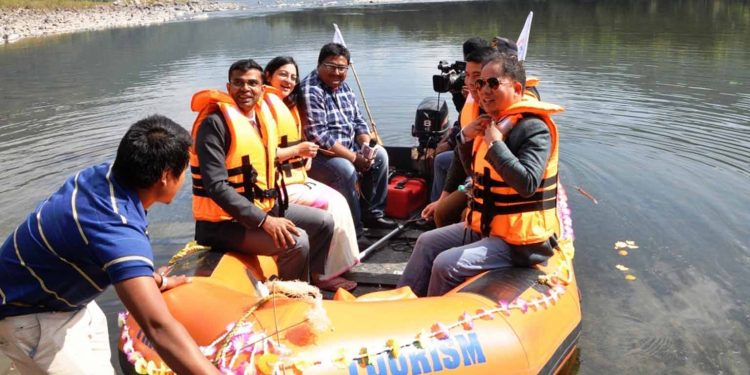 A motorboat on was handed over to the Paya Village Eco-Tourism Development Committee (PEDS) in West Siang. Image: Northeast Now

In a bid to promote tourism in remote areas of Arunachal Pradesh, a motorboat on Monday was handed over to the Paya Village Eco-Tourism Development Committee (PEDS).

The boat, which is funded under the Arunachal Tourism Society, was handed over by West Siang Deputy Commissioner Swetika Sachan.

The motorboat was procured following the signing an agreement between the PEDS and the tourism department for the promotion of tourism in the Yomgo River which flows through the Paya hamlet.

Speaking on the occasion, DC said that the ism industry can flourish from such small but creative ventures.

She further exhorted the villagers to come up with good ideas and create self-sustainable means and tourism sports in the beautiful river banks.

“Hospitality and amenities matter most to the tourists and construction of toilets and tourist huts in the bank is a must,” the DC said.

“As tribal civilization and culture has flourished in the river valleys and the people have been depending on the rivers for irrigation and construction materials,” said DFO Abhinav Kumar.

“It is also imperative on our part to give back to the river through conservation and by keeping it clean,” he added.

“The villagers can use fundraised from the motorboat for the development of the village,” the DFO added.

The rate to travel on the motorboat from the riverbank of Paya to that of Bene village is Rs 200 including tea and snacks.

The ride is expected to fetch a monthly income of more than Rs 1 lakh.

The villagers have, however, been asked to pay back a minimum amount of Rs 5000 annually as revenue for the government.