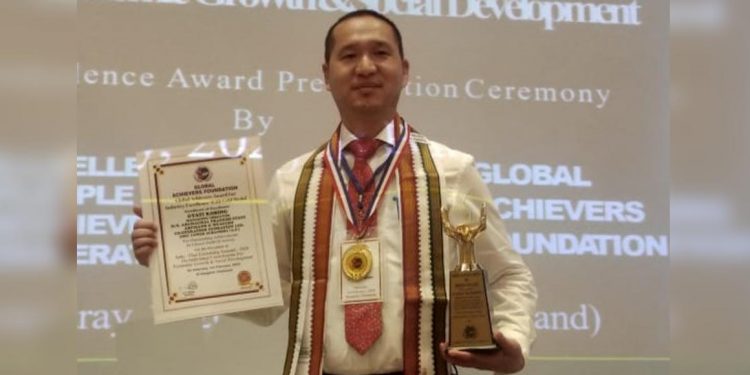 Gyati Kobin, the deputy registrar of cooperative societies (DRCS) of Lower Subansiri district in Arunachal Pradesh, has been conferred the “Global Achievers Award for Industry Excellence” by the Global Achievers Foundation.

The Global Achievers Foundation, a non-profit organization confers the Global Achievers Award on individuals for their remarkable role and outstanding achievement in their respective fields for the overall economic growth of the country.

The coveted award was presented to Kobin during the Indo-Thai Friendship Summit-2020 held at Silom in Thailand recently.

The theme of this year’s summit was ‘Individual Contribution for Economic Growth and Social Development’.

Kobin, who is responsible for reviving the dying cooperative movement in Ziro, the headquarters of Lower Subansiri district, is also the recipient of the Mahatma Gandhi Samman Award of Excellence, which was conferred on him by the Iconic Achievers Council of India in 2019.

The deputy registrar of cooperative societies is also a recipient of state commendation certificate which was presented to him by the Arunachal Pradesh government in 2008.

A few successful cooperative societies organized and supervised by Gyati Kobin are the Kiwi Grower Cooperative Society Ltd which received the state gold medal during the Independence Day celebrations in 2019.

He also supervised the Arunachal Pradesh State Artisans and Weavers Cooperative Federation Ltd which was conferred the “Award of Excellence” during the India International Cooperative Trade Fair-2019.

The Ziro Poultry Cooperative Farmers Society Ltd, which was conferred the ‘Best Cooperative Society’ award by the then President Pranab Mukherjee and the Arunachal Pradesh State Weavers Cooperative Federation Ltd are also some the endeavours of the Kobin.