Robin Hibu is the first IPS (Indian Police Service) officer from the state of Arunachal Pradesh. 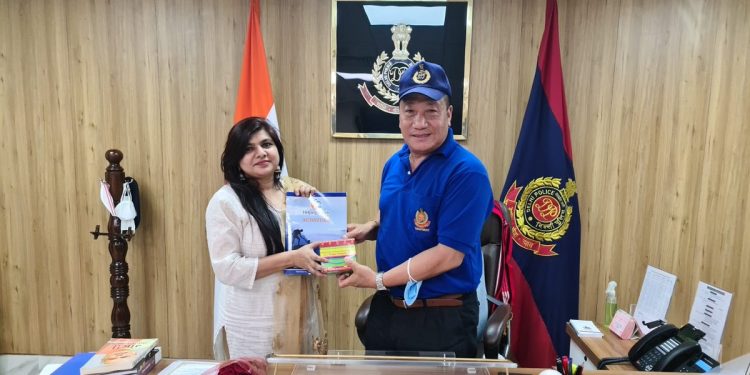 Renowned Hindi writer Renu Saini is all set to write the biography of IPS officer and Special Commissioner of Delhi Police – Robin Hibu, the go to man for every Northeasterner in New Delhi.

Robin Hibu is the first IPS (Indian Police Service) officer from the state of Arunachal Pradesh.

Robin Hibu informed Northeast Now, “It’s so heart touching for me that my small endeavors in serving the country as IPS and as a Gandhian social worker for less privileged vulnerable section of society through NGO Helping Hands (is recognised).”

He added: “Renu Saini…asked my permission to write my biography in Hindi for the inspiration of youth in India especially for Hindi speaking people.”

Renu Saini, a renowned Hindi writer and poet, had called on Robin Hibu on Saturday and sought his permission to write his biography.

Speaking to this correspondent, Renu Saini said: “I met Robin Hibu with regards to a different book that I am writing. But after meeting him and having a one-to-one conversation, I realised that his struggles and his journey in life must be penned down in the form of a biography, so that people get to know how with strong determination one can over come any obstacle.”

She told Robin Hibu: “You are an inspiration for today’s youth. Your tough initial journey in life with die hard Gandhian ideology has impressed me so much that I want to pen down all those unheard struggles of your life for posterity.”

Notably, this will be the second biography on IPS officer Robin Hibu – the first one being in English, written by Delhi-based biographer, Dr Thanmi Khamrang.

The first biography on Robin Hibu by Dr Thanmi Khamrang is nearing its completion.

Besides, he is also the president of NGO – ‘Helping Hands’ – which assists people from the Northeast living across India, whenever they are in distress.