Tensions between Assam and Mizoram have once again escalated in the inter-state border areas. 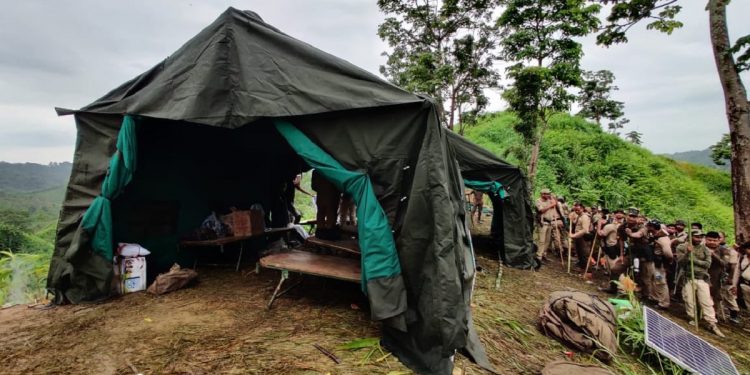 Authorities in Mizoram have rubbished reports of grenade being hurled by miscreants from the State at officials of Assam government near the inter-state border.

“No grenade was hurled. It was explosion of a tyre of an excavator,” said SP of Kolasib district in Mizoram – Vanlalfaka.

Earlier on Saturday, there were reports that a grenade was hurled at a team of Assam officials by suspected miscreants from Mizoram near Khulichara-Singoa area.

Tensions between both the states have once again escalated in the inter-state border areas.

The Assam officials claim that YMA (Young Mizo Association) activists have been ‘illegally’ camping at Shanti Basti area in Singoa.

On the other hand, Mizoram officials say that the Assam Forest department has started a road construction work in the Khulichara-Singoa border area, “in lands, which is being used by Mizos for centuries for cultivation”.

Meanwhile, police forces from both Assam and Mizoram have strengthen their presence along the inter-state border areas.

Assam Police ADG – Harmeet Singh is at the ground taking care of the situation.

Meanwhile, a massive force of Mizoram police is camping at Dhalakhal village that falls under the jurisdiction of Mizoram.

Assam CM Himanta Biswa Sarma, on Saturday, said, “Some tension is going on in both Assam-Nagaland and Assam–Mizoram borders. Assam Police has been deployed to protect our constitutional boundary. Being gateway to the northeast, we’re always open to discussions but do not encroach on our land.”