Union Minister of Sports and Youth Affairs Kiren Rijiju on Wednesday flagged off the Brahmaputra Aamantran Abhiyan – a river rafting expedition from the Mayum Hanging Bridge at Gelling in Upper Siang district of Arunachal Pradesh.

The main objective of the rafting expedition it to reach out to the younger generation and popularise the concept of ‘Living with the River’. 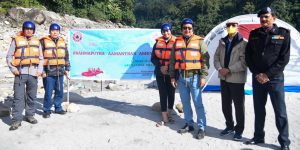 The expedition that started at Gelling in Arunachal Pradesh will culminate at Assameralga near the India-Bangladesh border in Dhubri district of Assam, after making pit stops at several locations along the entire route.

The event is an initiative of the Brahmaputra Board under the Centre’s Ministry of Jal Shakti with the support of the State Governments of Arunachal Pradesh and Assam, and the National Disaster Response Force (NDRF).

The rafting expedition will comprise of two legs in India covering about 900km.

The Arunachal leg started from Gelling and navigate along the Siang River to Pasighat in East Siang district.

Upon entering Dhemaji district in Assam from Pasighat, the Assam leg will start along the Brahmaputra River and will ultimately culminate at Assameralga in South Salmara district of Assam near the Indo-Bangladesh border.