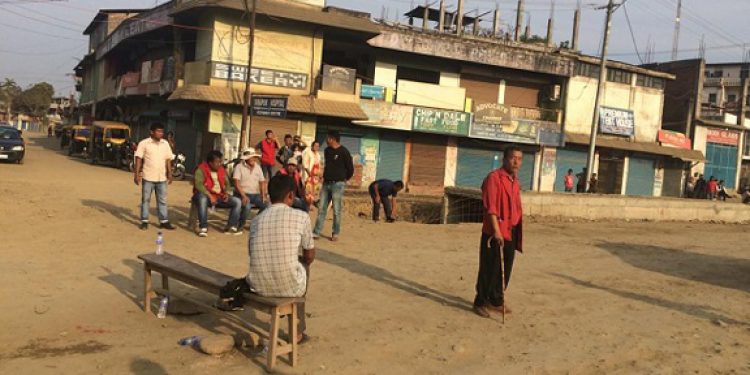 A gaon burha (village headman), along with others, is seen enforcing the 10-hour Nagaland bandh Dimapur on Monday. Image - Bhadra Gogoi

The joint coordination committee of tribe hohos, civil organisations and indigenous groups of Nagaland on Thursday expressed happiness at the response to the February 11 Nagaland shutdown against the Citizenship Amendment Bill (CAB) which “saved” the face of the state government.

The state government should be thankful to the organizations, which spearheaded the agitation against the bill, for saving its face and the destiny and the future of the people of the Northeast, the media cell of the committee said in a release.

Expressing “fullest appreciation” to the citizens of Nagaland for the peaceful conduct of the February 11 statewide shutdown, it said the state’s people have “saved” the face of the state government.

The committee said it does not want to take potshots at any entity but as far as the Citizenship (Amendment) Bill was concerned, mere appeals without the backing of street protests and agitations in the Northeast region would have ensured easy passage of the bill in the Rajya Sabha.

Despite this “moral victory”, the committee, however, said it will continue to closely monitor the situation as “entrusted” and “mandated”.

The success of the bandh made it loud and clear to the north eastern states and the central government that the Naga public totally opposed the Citizenship (Amendment) Bill, the committee said.

“The harsh reality is that the central government had been adamant in its stand to pass the bill in the Rajya Sabha even brushing aside the strong opposition of its own governments in Assam and Manipur,” it said.

It was only because of public protests and mobilisation of people’s support in Manipur, Assam, Tripura, Mizoram, Nagaland, Arunachal Pradesh and Meghalaya, after the spectre of revolt and secession in Assam and Mizoram had been raised, that the most controversial bill in independent India got stalled in the Rajya Sabha, the committee said.

It acknowledged the contribution of the Naga people during this momentous occasion and expressed appreciation for the district administrations and the police forces across the state “for respecting the sentiments of the people.”