Alliance with BJP will make 2021 polls tough for AGP: Mahanta 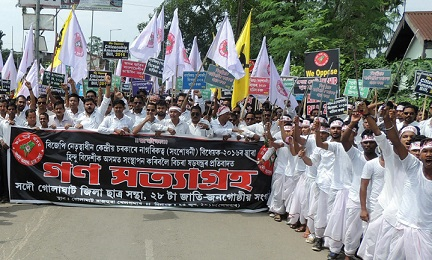 Has the Citizenship (Amendment) Bill influenced the just held parliamentary polls in Assam? Have the series of protests over the Bill impacted voters just before pressing the EVM button? Or the BIll was just did not arouse any emotion among people during the voting?

Although the poll pundits have already come out with their analysis, one has to wait till May 23 to get a clear picture as whether the CAB had dampened the ruling BJP’s dreams of winning ten out of 14 seats in Assam or it will boost the Congress’ camp by improving the number tally.

The Citizenship Bill in recent times has seemingly played an important role at least in Assam during the recently held Lok Sabha elections.

Two major political parties the ruling BJP and opposition Congress had fought the 2019 Lok Sabha election on CAB—while the BJP has made it clear that the CAB will be passed in both the Houses of parliament immediately after the party returns to power, the Opposition party on the other had assured to scrap the contentious Bill if they are given mandate to form the government.

Reiterating his stand against the Bill, former Assam chief minister Prafulla Kumar Mahanta said that the 2021 assembly elections in Assam would have been easier for the regional party had it not allied with the BJP ahead of the Lok Sabha polls.

The two-time Assam chief minister not only continued to express his opposition to the Bill, but also refrained from casting his vote in the recently held Lok Sabha elections as a mark of protests against the contentious Bill that seeks to grant citizenship to non Muslims from Pakistan, Bangladesh and Afghanistan who came to India due to religious persecution.

It was perhaps not an easy decision for Mahanta not to cast his vote for the candidate of the political party that he formed and ruled the state as chief minister for two terms. A signatory of the historic Assam Accord, Mahanta represents Barhampur constituency in Assam Legislative Assembly, which come under the Nagaon Lok Sabha constituency.

Mahanta, who had been very vocal against the Bill since the beginning and had tried his best to desist the regional party from renewing alliance between the AGP and BJP ahead of the Lok Sabha polls, also refrained from campaigning for the AGP candidates in the Lok Sabha polls to protest against the alliance.

“The 2021 assembly elections would have been easier for AGP had the regional party fight the Lok Sabha polls on its own. But now the 2021 assembly polls will be difficult for us,” Mahanta said.

The Bill, Mahanta said, has played its role during the elections. “The Bill has affected the voting in different pockets of the state differently. We will come to know about this only when the results are out,” said Mahanta.

“The bill seeks to offer citizenship to non-Muslims migrants from Bangladesh, Pakistan and Afghanistan till December 2014. This would nullify the historical Assam Accord. The Accord has made it clear that those who come after midnight of August 24, 1971 must go irrespective of their cast and religion,” he said while also terming the bill as communal and against the spirits of Indian constitution.

He said that the passage of the Bill in the parliament and implementation of it will pose grave threat to the indigenous communities of the state.

The Bill will give citizenship to larger numbers of migrants and the indigenous communities will be minority in their own land,” Mahanta said adding that the BJP government at the Centre and in the state have betrayed the people of Assam over the issue.

The AGP,which had entered into an alliance with the BJP ahead of the 2016 assembly polls also opposed the Bill.

The AGP leadership had continued to oppose the Bill and in January this year the party snapped its ties with the BJP after the saffron party leadership made it clear that they are not backtracking on the Bill.

Following this, the AGP snapped its ties with the BJP. However, the regional party despite opposition from grassroots workers renewed the alliance with the BJP ahead of the Lok Sabha elections.

The regional political party drew huge ire from its grassroots workers over the decision to renew the alliance and many of the party leaders resigned from their ranks in the party as a mark of protest against the alliance.

“Non political organization like the All Assam Students’ Union (Aasu) should take the lead in uniting the people of the state against the Bill. The BJP leadership has made it clear that they are going to pass the Bill as soon as possible. There is no alternative apart from uniting all the anti-Cab forces to put up a joint fight,” said Mahanta.

Asked about his future plans to stop the Bill from getting passed, Mahanta said that he would make his plans public soon.

“I’ll spell it out when time comes. However, I still believe that AGP is capable to play a strong role against the Bill and I hope the party will play its role sooner or later,” he added.