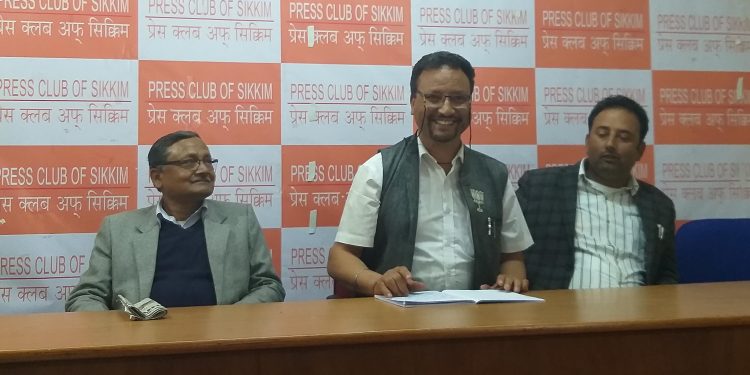 Three leaders of the BJP in Sikkim have resigned from the party on Thursday after being dissatisfied at the alliance between the BJP and Sikkim Krantikari Morcha (SKM) in Sikkim for the upcoming election.

Sikkim BJP vice-president and spokesperson JB Darnal and vice-president Madan Karki and general secretary of East District Committee DR Khatiwada have resigned from the primary memberships and all posts and responsibilities of the party.

Addressing a press conference here on Thursday afternoon, Darnal expressed his deep dissatisfaction over the alliance between the BJP and SKM.

He mentioned that many of the leaders and workers of the state unit of the party were not happy and satisfied at the alliance.

“We are not satisfied with SKM party leaders going directly to the central committee of BJP in Delhi for pre-poll alliance. We worked so hard to bring the BJP to this position in the state but we were not even informed about the alliance,” he expressed.

Darnal said, “The BJP having anti-corruption stand, now is having alliance with a party which has been led by a convicted leader in a corruption case.”

He added that this shows the double-standard of the BJP.

Darnal also alleged that SKM party has never followed the dharma of alliance.

He informed that the SKM had alliance with the BJP in 2014 bye-election and then again in the last municipal elections in the state but they always “betrayed the BJP soon after the elections”.

Darnal also expressed dissatisfaction at the party’s state president for not informing about the process of the alliance so far.

Responding to media queries, Darnal mentioned that they are yet to decide on joining any other political party.