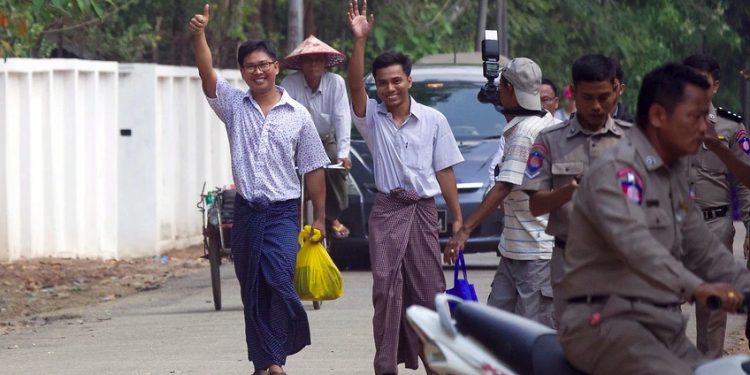 Two Reuters journalists Wa Lone and Kyaw Soe Oo who were arrested in Myanmar in December 2017 for violating the Official Secrets Act were released on Tuesday, after spending more a year behind bars.

The duo was arrested while investigating the extrajudicial killings of 10 Rohingya Muslims by security forces in Rakhine State.

Lone and Oo were released as part of an amnesty of 6,520 prisoners by Myanmar President Win Myint.

After a long, testing time in prison and appeals to the Myanmar high court and Supreme Court, the two journalists finally were able to walk out free and reunite with their families.

The imprisonment of the journalist received a lot of media attention with questions being raised on Myanmar’s democracy as well as journalists’ freedom in terms their work.

Lone (33) and Oo (29) were arrested in December 2017. The two men were found guilty of violating the Official Secrets Act last September by a district court and sentenced to seven years in prison.

Reports stated that they looked happy and were seen waving to the people while walking out of the jail where they were held in the outskirts of Yangon.

Their release has been widely hailed with celebratory messages coming from media houses and journalists from across the globe.

It is to be noted that last month, Lone and Oo were honoured with the prestigious Pulitzer Prize.

The Pulitzer Prize is given for outstanding contributions in journalism, literature and musical composition in the United States.