The arrests were based on vague charges such as "hurting religious sentiment" or undermining "law and order, says HRW 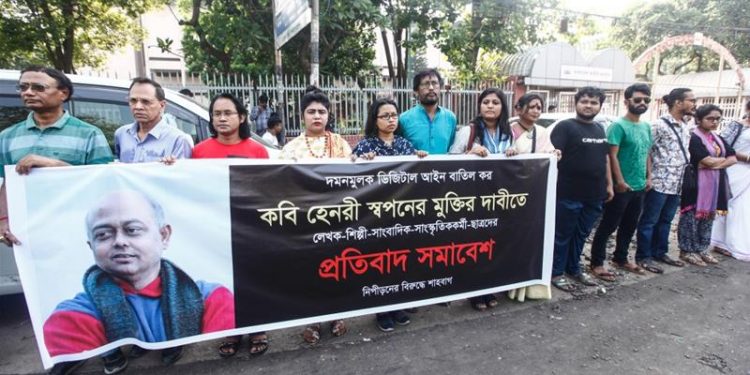 Bangladesh government has made a series of fresh arrests in their crackdown on the right to free speech, Human Rights Watch said on Friday.

The arrests were based on vague charges such as “hurting religious sentiment” or undermining “law and order“.

They were arrested under section 57 of the draconian Information Communication and Technology (ICT) Act and under the Digital Security Act 2018.

“Arresting activists, poets, and lawyers for exercising their right to free speech is straight out of the authoritarian playbook,” said Brad Adams, Asia director at Human Rights Watch.

Adams said the Bangladesh government should stop locking up its critics and review the law to ensure it upholds international standards on the right to peaceful expression.

A group of writers, artists and journalists staged a protest in Dhaka’s Shahbagh square on May 15, saying they would go on an indefinite strike if Sawpon and Mahmood were not released.

Both Sawpon and Mahmood were granted bail on May 16 but Kaium remains in detention.