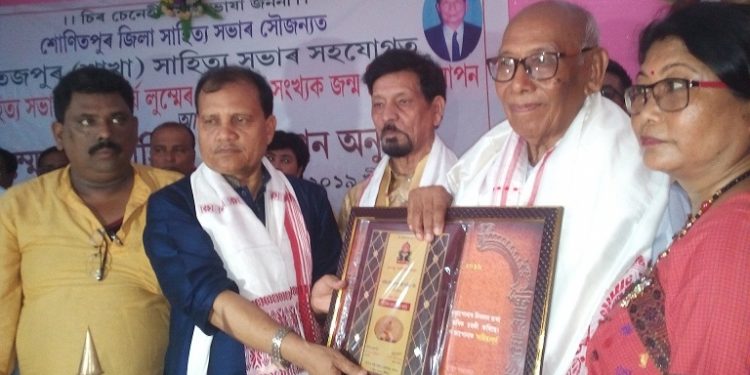 The Asom Sahitya Sabha presented the award to noted litterateur Terang at a function organized in connection with the 80th birth anniversary of Sahitya Surya Lummer Dai at Lummer Dai Bhawan in Tezpur on Saturday.

Receiving the award, ex-ASS president Terang said that he was overwhelmed with the award conferred on him in the memory of a great figure like Lummer Dai.

Expressing his gratitude towards Asom Sahitya Sabha, Terang also said it was not simply an award for him rather a noble mechanism initiated by ASS, to bridge the gap between the people of Karbi Anglong in Assam and Arunachal Pradesh and thereby strengthening the ethnic-fabric among different communities living in the region.

He urged ASS to keep the contributions of Lummer Dai alive through such programmes.

In the programme, Terang gifted Karbi traditional attire to Lummer Dai’s son Mibom Dai and other dignitaries accompanying him as a symbol of love and integration.

In his speech, Terang also termed the Assamese language as a convenient link language.

He also mentioned that Assamese language is the easiest language in the world.

Speaking on the occasion, ASS president Rajbongshi said, “Assamese language will always remain acceptable as the Asom Sahitya Sabha has been doing hard work for its upliftment. We will combat every evil force which always tries to stand against Assamese language.”

The day-long function started with unfurling of Sabha’s flag by the working president of Sonitpur Sahitya Sabha, Ramen Goswami and it was followed by paying homage to late Lummer Dai by his son Mibom Dai.