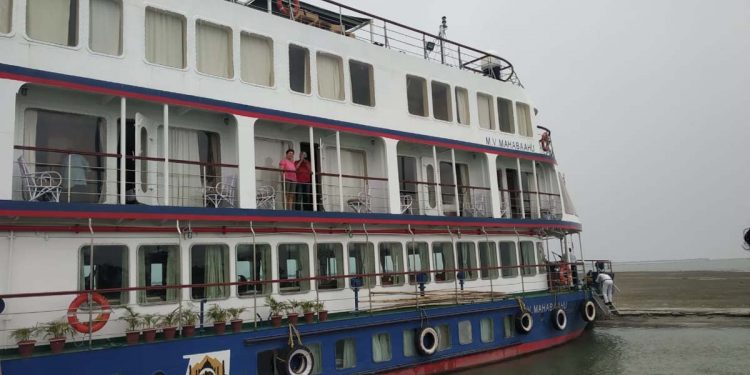 A view of MV Mahabahu on the Brahmaputra at Neematighat. Image credit - Northeast Now

The Jorhat district administration has asked cruise ship MV Mahabahu not to leave Jorhat docked at Neematighat off the Brahmaputra.

The district administration has taken steps to quarantine the crew and passengers of cruise ship MV Mahabahu.

The cruise ship docked at Neematighat off the Brahmaputra here on Friday night.

The district administration said the cruise ship will not be allowed to leave Jorhat until further direction from higher authorities at Dispur.

The district administration has also isolated five staff members of the resort where the coronavirus-infected US tourist had spent a night before leaving Jorhat in the cruise ship.

During the stay, the tourists will not be allowed to disembark.

The action comes in wake of an American tourist with the surname Hewitt testing positive for COVID 19 or coronavirus in Bhutan on Friday after he halted a night on February 22 here.

He also travelled through Jorhat to Guwahati in MV Mahabahu on February 23.

The tourist accompanied by a woman had put up in the posh Thengal Manor resort on the outskirts of Jorhat town on February 22 and spent the night after travelling from Kolkata on a flight.

Thereafter, Hewitt and his partner boarded the MV Mahabahu on February 23 morning and with the ship proceeded to Guwahati.

Jorhat deputy commissioner Roshni A. Korati in a press briefing on Saturday evening said all the 56 persons (22 foreign tourists and 34 crew members) onboard have been kept in isolation on the ship.

She said a medical team from JMCH comprising eight microbiologists, one epidemiologist, one WHO doctor from Dibrugarh and paramedical staff were taken on a boat to the ship.

The ship has been anchored at a sandbar in the Brahmaputra near Neematighat.

Korati said the team after carrying out scanning and other necessary tests found no sign of coronavirus infection in them.

However, the deputy commissioner said the team took throat swab of a crew member after he volunteered the information that he had suffered from slight fever on Friday night.

The sample will be sent to ICMR Regional Centre at Lahowal in Dibrugarh district for testing.

An elderly foreign tourist suffering from heart ailment has been shifted to the JMCH isolation ward along with her daughter-in-law and a paramedic of the ship for better care and necessary treatment.

Majuli deputy commissioner Bikram Kairi said Hewitt got off at Majuli and that he had watched a ‘Bhaona’ function for two hours before leaving.

Korati said since Friday night the administration after identifying the five staff members, who came in contact with Hewitt, were quarantined at Thengal Manor.

All were found to be asymptomatic and except the one crew member, no others were swabbed but they are under watch.

Replying to query the DC said an effort was on to trace the taxi drivers who had brought Hewitt to Thengal Manor from the airport and again dropped him at Neematighat the next day.

The DC said the government was also tracking all the co-passengers of Hewitt who had travelled along with him on the ship back to Guwahati and those who had come by the same plane.

Urging people not to panic she said the district administration had taken all precautionary measures including cancellation of Holi congregations as well as awareness programmes.

Meanwhile, the Majuli district administration has also sought equipment from Jorhat to screen foreign tourists who landed on the river island.

Control rooms have also been set up at Jengraimukh and Garmur hospitals.

The DC said the river cruise MV Mahabahu will be stationed at Neematighat for 7 days.

She further said Hewitt had visited Majuli on February 25 and that the Majuli DC is taking all necessary steps for contact listing and follow-up.