#CheckTheFake-22: A conspiracy to paint older age in pain 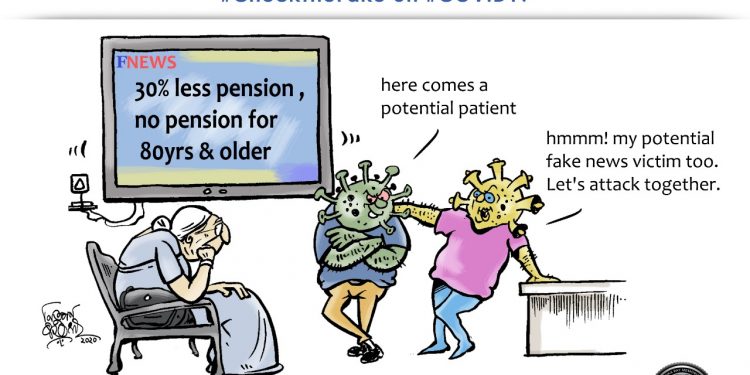 Pension cut by 30 per cent is the new way of panicking people amid this lockdown.

The message about slashing the pension of government employees by 30 per cent and terminating the same for people older than the age of 80 on social media platforms like WhatsApp and Facebook has tensed the situation.

Not only social media platforms, but some media outlets like ‘Rediff’ publishing articles with headline “Govt may slash pension to employees to by 30%” in the start of April has also encouraged such false claim.

Immediately after this, PIB FactCheck on April 9 but the claim by saying that “Government may reduce employees’ pension by 30 per cent and terminate it for those above the age of 80, in the context of Covid-19, is FAKE”.

Even the Department of Pensions and Pensioners’ Welfare (DoPPW) has clarified in its communique issued later that there is no such proposal for reduction of pension and no action is contemplated by the government in this respect.

Instead, the government is committed for the welfare and well-being of the pensioners.

The message created wildfire among the people after the Union Cabinet decided to reduce the salaries, allowances and pensions of MPs by 30 per cent for a year.

The Union Cabinet has also approved the temporary suspension of the MPLAD funding from 2020-21 and 2021-22.

With an objective to lend a helping hand amid this crisis, the President, Vice President, Prime Minister and all Members of Parliament have also decided to voluntarily take their salary cut by 30 per cent for one year.

However, pensions and allowances of MPs will remain unaffected, the government said.

Similarly, there is not any cut of pensions for the government employees decided by the government. The decision of MPs might have created misunderstanding among the people with certain round up messages supporting the fake claim.

FAKE: Government is going to slash pension of the employees by 30 per cent (a facebook user).

FACT: “It is being reported that a 20% cut in Central Government Pensions is being planned.This news is FALSE. There will be no cut in pension disbursements.

It is clarified that salaries and pensions will not be affected by Government Cash Management [email protected]” – tweeted Ministry of Finance on April 19.