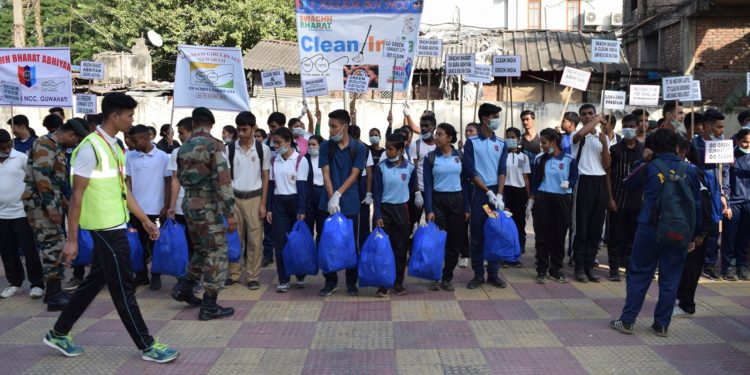 As part of the anti-plastic drive, the NCC cadets carried out a massive plogging drive at Paltan Bazaar in Guwahati.

Cadets from different units under the National Cadet Corps (NCC) Group HQ in Guwahati picked up plastics from various locations and culminated at the Group HQ at Paltan Bazaar.

The NCC cadets during this drive made an endeavour to make a lasting impression on the environment by creating awareness against use of plastic contents.

To create an impact, the NCC cadets split into teams for a cleaning-up drive to remove all the plastic garbage from the surroundings in and around Paltan Bazaar area.

“The plogging drive is a part of the Swacchta Pakhwada launched by the NCC throughout the country as part of the activities of cleanliness drive launched on the occasion of 150th year of Mahatma Gandhi’s birth anniversary,” said Guwahati-based defence PRO Lt Col P Khongsai.

The NCC units under the guidance of Group HQ chalked out a detailed programme as part of which plogging drive has been carried out at different locations throughout Assam from December 1, 2019 and it will continue till December 15, 2019.

“The aim of this massive exercise is to raise awareness amongst the community, collect plastic waste and make the surroundings clean,” Khongsai informed.

The slogan for this event is ‘Plastic Se Raksha – Swachhata Hi Suraksha’.

Community awareness programmes such as street play, debates, quiz and painting competitions among NCC cadets have also been organised.

These events have been organized to make people aware about the ill-effects of the use of plastics on the environment.

The aim of these events is also to bring about behavioural change with respect to sanitation and give up use of plastic including carry bags, plastic cutlery and plastic water bottles.

Speaking on the occasion, Col Rajeev Verma stressed on the necessity to avoid using plastic because of its harmful effects on the environment.

He urged the cadets to begin the change from themselves by resolving to avoid using plastic in their day-to-day life.