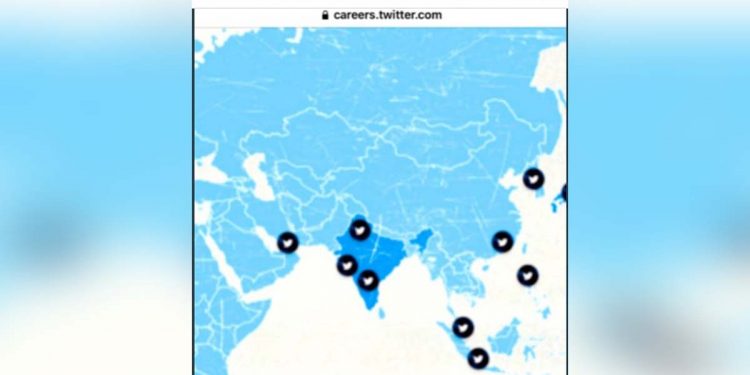 Twitter dropped a wrong India map from its website that showed Jammu & Kashmir and Ladakh as a separate country after uproar.

The incorrect map, appeared on the career section of Twitter‘s website, showed J&K and Ladakh outside India.

The map drew sharp reactions from the netizens who demanded strict actions against Twitter.

According to sources, the government warned of tough action saying that the distortion of the country’s map is a serious offence.

Sources said the micro-blogging platform could face financial penalties, 7 years in jail for its officials and could be blocked under Section 69A of IT rules.Twitter is a repeat offender, said sources. In the past, it had shown Leh as a part of Jammu and Kashmir and Ladakh as a part of China.

BJP leader P Muralidhar Rao tweeted: “Twitter is confirming by its actions the apprehensions expressed widely in the last few months about its bias towards Indian interests and sensitivities.”

He added, “Twitter’s mischievous representation of Indian Map is strongly condemned. Twitter has to follow law of land..!”

Twitter is confirming by its actions the apprehensions expressed widely in last few months about its bias towards Indian interests & sensitivities.

Another Twitter user said the micro-blogging platform is “mocking and challenging India’s sovereignty by using the map without Kashmir”.

Dear @rsprasad ji, @PMOIndia@anjanaomkashyap
This is how @twitter is mocking and challenging India’s sovereignty by using the map without Kashmir.

In the past, Twitter and the Indian government have been at loggerheads in many occasions.

Twitter engaged in a tussle with the Indian government over the new IT rules.

The US digital giant has drawn flak for its failure to fully comply with the new IT rules.

However, as per the new IT rules, an Indian resident should be appointed in the post.

On Friday, Union electronics and IT minister Ravi Shankar Prasad’s Twitter account was locked for an hour.