“A full rescue operation is yet to start,” informed humanitarian groups. 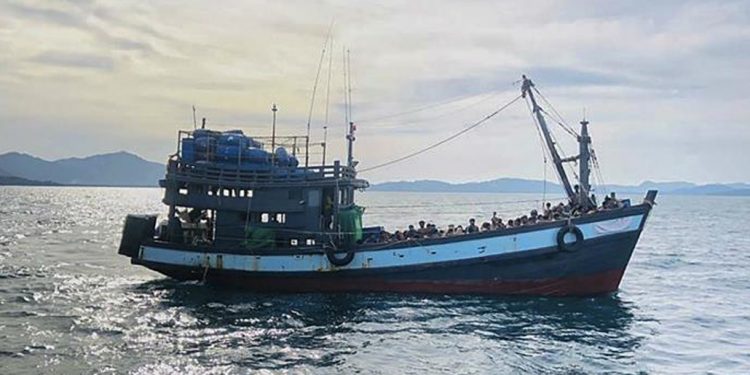 Vessels of the Indian Coast Guard traced down the boat carrying at least 90 Rohingya refugees, which drifted into the Indian waters after the engines of the boat broke down seven days ago.

According to humanitarian groups closely monitoring the situation informed that the stranded Rohingya refugees have been given food and fresh water by the Indian Coast Guard personnel.

However, the humanitarian groups also clarified that the initiative taken by the Indian Coast Guard is not a rescue mission.

“A full rescue operation is yet to start,” informed humanitarian groups.

Chris Lewa of the Bangkok-based ‘Arakan Project’ said, “What the Rohingyas on that boat need most now was medical attention. Many of them are sick, down with dehydration and acute diarohhea, and at least eight of them have died so far.”

The boat with 90 Rohingya refugees and 3 Bangladeshi crewmen began its voyage from seaside town of Cox’s Bazar in Bangladesh towards Southeast Asia on February 11.

However, the engines of the boat broke down midway six days ago and has been drifting towards India’s Andaman since then.

UN High Commissioner for Refugees (UNHCR) has appealed for immediate rescue of the Rohingya refugees on the boat.

“UNHCR, the UN Refugee Agency, is appealing for the immediate rescue of a group of Rohingya refugees in distress,” Indrika Ratwatte, Director of the UNHCR Regional Bureau for Asia and the Pacific said.

“We appeal for immediate action to save their lives and prevent further tragedy,” said the UNHCR.

A group of Rohingya refugees in distress on the Andaman Sea are desperately in need of rescue.

We appeal for immediate action to save their lives and prevent further tragedy. https://t.co/8NvO0fu2We pic.twitter.com/z8R8BXVDs6