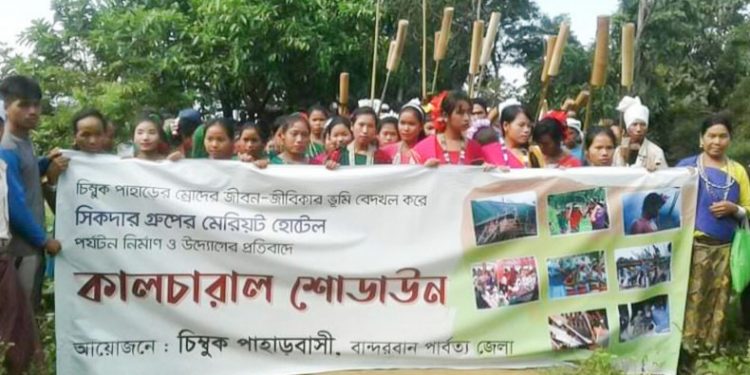 The Rights and Risks Analysis Group (RRAG) on Tuesday requested the chief ministers of the Northeast to urge External Affairs Minister S Jaishankar to take up the issue of forcible eviction of about 7,000 Garos and 10,000 Mro people in Bangladesh.

The group also wants the External Affairs Minister to raise the implementation of the Chittagong Hill Tracts (CHTs) Accord with the Bangladesh government during his forthcoming visit to Dhaka on March 4.

“Unless these issues are raised, there are strong possibilities that the Garos being displaced from Madhupur forest, Tangail district may be gradually forced to flee to Meghalaya while indigenous Mro people of Bandarban district of the Chittagong Hill Tracts similarly may flee to Mizoram State and/or assimilate into mainstream Islamic society in Bangladesh. Further, non-implementation of the Chittagong Hill Tracts Accord of 1997 has direct implications for peace, security and stability in India’s Northeastern region,” said Suhas Chakma, director of the RRAG.

The Parliamentary Standing Committee of the Forest and Environment Ministry in Bangladesh asked the authorities to issue eviction notices to the alleged illegal occupants of the Madhupur forest i.e. indigenous Garo people living in the area for centuries by January 30, 2021.

Protests by the Garos have been organized but to no avail.

In 2016, the Forest and Environment Ministry of Bangladesh issued a notice declaring 1,945 acres of land in Madhupur under Tangail district to be rezoned as a forest reserve.

About 7,000 Garos in 13 villages, mostly Catholic villagers, will be displaced.

In September 2020, the Bangladesh Army and Sikder Group conglomerate company, R&R Holdings Limited, started construction in the five-star tourism project including a Marriott hotel, extensive network of buildings, roads, drainage and sewage system at Chimbuk-Thanchi area of the Bandarban district of the Chittagong Hill Tracts (CHTs).

This project will displace about 10,000 indigenous Mro people.

Further, the key provisions of the CHTs Accord signed on 2nd December 1997 between the Government of Bangladesh and the Jana Samhati Samiti have not been implemented as on date, the group said.