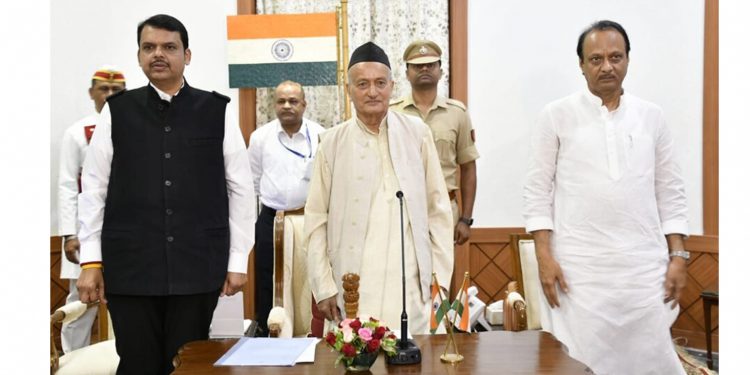 The NCP faction that broke away under the leadership of Sharad Pawar’s nephew Ajit Pawar, forged an alliance with the saffron party as it turned its tables on rivals in an “overnight coup”.

NCP chief Sharad Pawar, in fact, had even claimed that “NCP-Sena alliance government will complete its term in Maharashtra”.

The development has brought a major twist in the Maharashtra saga as a day earlier it was senior Pawar who announced that the new Maharashtra government would be led by Shiv Sena chief Uddhav Thackeray.

“I am happy to have been given another chance to serve as Maharashtra CM,” Fadnavis said after taking the oath.

“The people of Maharashtra had given a very clear mandate but the Shiv Sena, which fought the elections alongside us, rejected people’s mandate,” he added.

“The state needs a strong government and we are determined to give them that. The President’s rule should end now,” Fadnavis added.

Ajit Pawar was sown in as the deputy CM of the state.

Prime Minister Narendra Modi, in a tweet, congratulated Fadnavis on becoming the CM for the second time.

In a tweet, he said, “Congratulations to @Dev_Fadnavis Ji and @AjitPawarSpeaks Ji on taking oath as the CM and Deputy CM of Maharashtra respectively. I am confident they will work diligently for the bright future of Maharashtra.”

“My heartiest congratulations to Maharashtra CM Sri @Dev_Fadnavis on taking oath for the second term, and Sri @AjitPawarSpeaks for being inducted as Dy CM. Along with #NCP, @BJP4India shall take Maharashtra to new paths of progress,” he tweeted.

Nagaland CM Neiphiu Rio in a tweet said, “Congratulations, @Dev_Fadnavis and @AjitPawarSpeaks on taking oath as the Chief Minister and Deputy Chief Minister of #Maharashtra, respectively. I wish you a successful tenure.”

“Congratulations and best regards to @Dev_Fadnavis Ji and @AjitPawarSpeaks Ji on taking oath as the CM and Deputy CM of Maharashtra respectively. I believe you will put Maharashtra on the path of good Governance and development at a fast pace,” he tweeted.