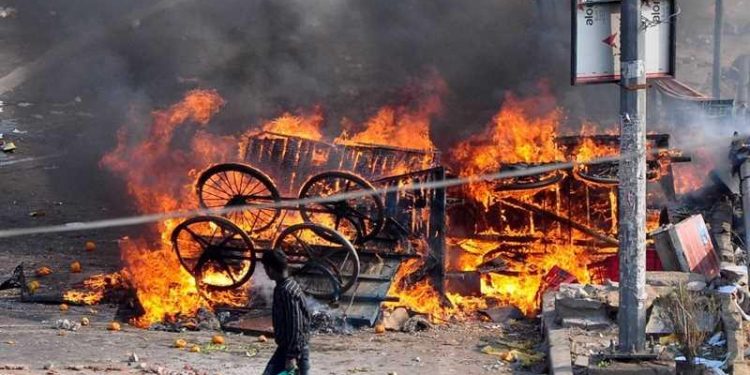 The death toll in Delhi violence over the Citizenship (Amendment) Act (CAA) climbed to 20 on Wednesday.

Sunil Kumar, medical superintendent of GTB Hospital, said that the death toll has risen to 20 on Wednesday morning.

Delhi chief minister Arvind Kejriwal said the army should be called in and curfew imposed in Northeast Delhi.

“I have been in touch with large no of people whole night. Situation is alarming. Police, despite all its efforts, are unable to control situation and instil confidence. Army should be called in and curfew imposed in rest of affected areas immediately. I am writing to home minister to this effect,” he said.

Security personnel on Wednesday conducted a flag march in Babarpur in North-East Delhi after its nearby areas witnessed arson and stone-pelting.

All the security personnel were equipped with riot gears and batons during the march. Some of them were also seen with INSAS rifles, Live Mint reported.

Congress president Sonia Gandhi has asked home minister Amit Shah to resign in the wake of three days of violence in northeast Delhi.

Gandhi blamed BJP leaders for creating an atmosphere of fear with hate speeches, and held both the central and Delhi governments responsible for the situation in the capital territory, India Today reported.

Maharashtra minister and NCP leader Nawab Malik has said the violence in Delhi is similar to what happened in Gujarat in 2002 and raised doubts about the role of police.

The National Security Advisor Ajit Doval is said to have given some ‘tips’ to raise the morale of the police during the midnight meeting with the Delhi Police officials and the police force received flak for its handling of the situation.

A top officer of the Delhi Police said that the NSA did ask for the reasons of the eruption and increase in the violence to which the police officials were unable to give any satisfactory answers. But, the NSA, instead of any harsh words, tried to lift the morale of the force.

Sources also said that Doval is also likely to brief Prime Minister Narendra Modi and the Cabinet about the prevailing situation.