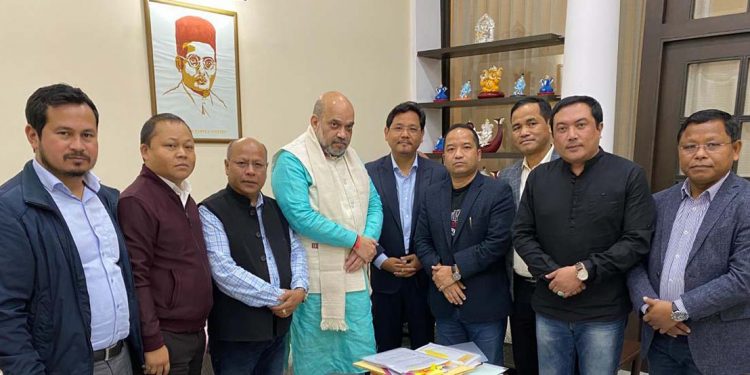 Union home minister Amit Shah on Thursday assured to examine the resolution passed by the Meghalaya Legislative Assembly for the implementation of Inner Line Permit (ILP) in the state.

The assurance was given by Shah during his meeting with a delegation of the Meghalaya Democratic Alliance (MDA) government led by chief minister Conrad K Sangma in New Delhi on Thursday evening.

The MDA partners met Shah to urge the central government to implement ILP in the state.

The Chief Minister’s Office (CMO) informed that the meeting was positive, and the union home minister assured of protecting the rights of the tribals.

“The union home minister assured delegation led by the chief minister that the government of India is examining the resolution passed by the Meghalaya Legislative Assembly for the implementation of Inner Line Permit in the state,” the CMO stated.

In the 40-minute meeting with Amit Shah, the Meghalaya delegation was assured that the central government will never allow the dilution of tribal rights.

“The Constitution of India has different provisions to protect the rights of the tribals and Govt of India will never allow those rights to be diluted in anyways.”

“If there are any measures that would tantamount to encroachment on the tribal rights, the Govt of India will work in coordination with Meghalaya to safeguard the interest of the people.”

“In every possible way the central government will always ensure that tribal rights are protected,” the CM said quoting assurance from the union home minister.

Apart from ILP, different pressing issues of the state including development, especially of border areas and improving the overall inland security were also discussed during the meeting.

“The Meghalaya delegation expressed its satisfaction with the meeting and has informed that Govt of India has shown its serious concern for the people and they were really very positive about the outcomes,” the CMO said in a statement.