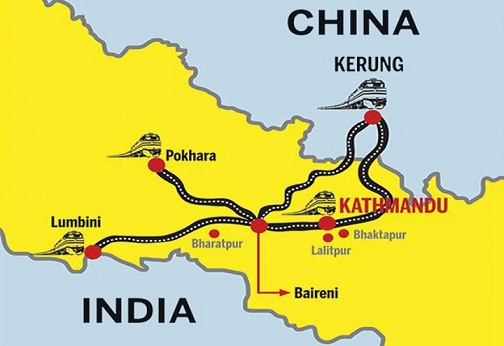 A team of Chinese engineers and officials are set to arrive in Kathmandu within a couple of weeks for conducting a feasibility study of the Kathmandu-Kerung railway line, The Kathmandu Post reports. The development follows understanding between Nepal and China that it is possible to develop the project, which lies in a difficult terrain, at a recent meeting held in Beijing.

According to the report, China Railway First Survey Design Institute Group has been appointed to conduct the study. A delegation led by Ministry of Physical Infrastructure and Transport Secretary Madhusudan Adhikari had been to China last week to discuss the matter. “During the meeting in Beijing, the Chinese side had informed us that a team will arrive in Kathmandu at the earliest to study the overall aspect of railway line,” Prakash Bhakta Upadhayaya, spokesperson for the DoR said. He added that the team will submit its report by August 2018.

Following a preliminary study on railways in Nepal in the second week of November 2017, a Chinese delegation had concluded that two rail routes—Kathmandu-Kerung and Kathmandu-Pokhara-Lumbini—could be developed in the country. The team led by Zheng Jian, the deputy director (Vice-Minister) of National Railway Administration of China, had made field trips to Kerung, Pokhara and Lumbini as part of the study.

Aspects like altitude variation between Syaprubeshi and Kerung and the gap created between Indian and Tibetan tectonic plates after the 2015 earthquake were the major concerns of the Chinese side during the visit. The DoR has stated that around 90 percent of the railway line from Kerung to Kathmandu, which is estimated to be 100-120km long, will be either through a tunnel or on a bridge, showing the complexity of the project.

“Though the current study seems to be identical to the previous one, there are fundamental differences. The previous study was conducted to determine the possibility of the railway project. Given that it is possible to construct the railway line, the current study will be holistic in nature and dwell on the feasibility aspect,” Upadhayaya told The Kathmandu Post.

The idea of connecting railway link from Kerung, the bordering region in China, had started with a motive to increase connectivity and accessibility with the northern neighbour. Several Chinese media have reported that a railway link between Nepal and China is likely to be established by 2022. The railway stretches out around 540km from Shigatse to the Jilong county in Tibetan Autonomous Region that lies on the international border.

Moreover, the trans-Himalayan railway connectivity had gathered momentum after Nepal and China agreed on “exchanging ideas and proposals on constructing cross-border railways and railway network in Nepal and support enterprises to start related preparatory work as soon as possible” during Prime Minister KP Sharma Oli’s visit to Beijing in 2016. The government subsequently announced in the budget that it would prepare a detailed project report of the Rasuwagadhi-Kathmandu-Pokhara-Lumbini rail network and that the construction would start within two years. The government has allocated Rs 4 billion for the preparations in the current fiscal year. The DoR has estimated the project cost at Rs 35 billion.