The Centre has reduced the interest rates on public provident fund (PPF) and other small saving schemes including national savings certificate (NSC) for first quarter of financial year 2021 with effect from April 1.

The Union finance ministry has issued a notification in this regard.

“In exercise of the powers conferred by Rule 9(1) of the Government Savings Promotion General Rules, 2018 the rates of interest on various small savings schemes for the Q1 of FY 2021-22 have been revised,” the Union finance ministry said in its notification.

According to a report, the new interest rate on PPF will be the lowest since 1974.

The revised interest rates will come into effect from April 1 and it will remain effective up to June 30, 2021.

It has been reported that the interest rate on savings deposits has been reduced by 0.5% to 3.5% from the existing 4% annually for the first time. 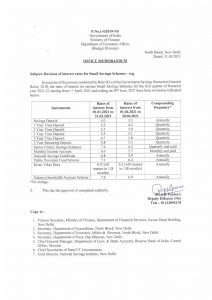 The steepest fall of 1.1% has been effected in the one-year term deposit.

The Centre had kept interest rates unchanged since the past three quarters.