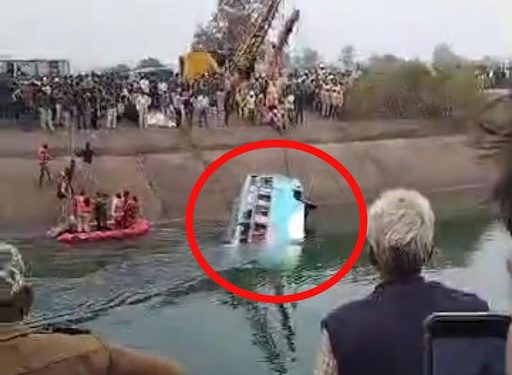 At least 38 passengers were killed after a bus carrying over 50 people fell into a canal in Sidhi district of Madhya Pradesh on Tuesday.

The incident took place at Rampur Naikin area at around 7.30 am when the bus was on the way Satna from Sidhi district.

Police said the bus was to move from Chhuiya Valley area but the driver, who was later saved, took a detour to avoid a traffic jam.

However, he lost control over the vehicle which then plunged into the canal.

An SDRF team was rushed to the spot and the bus was taken out of the canal with the help of a crane.

As a precautionary measure, water from the nearby Bansagar dam was stopped.

Police said the bus was overcrowded as the 32-seater vehicle had 54 passengers.

At least seven passengers were rescued. The death toll could rise after the rescue is over.

The CM also cancelled his Tuesday events in the wake of the tragedy.