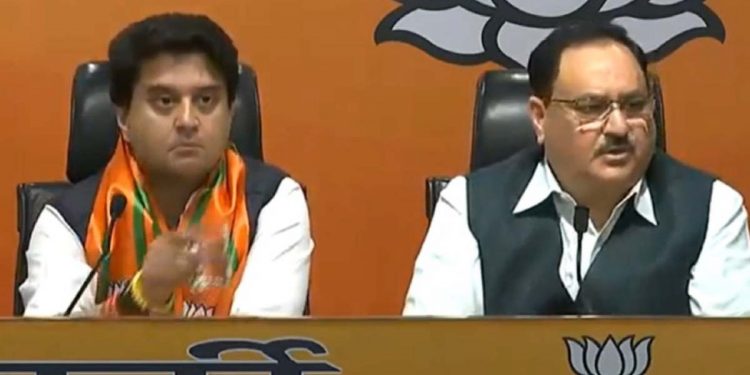 Jyotiraditya Scindia, who donned saffron after parting ways with the Congress on Wednesday, has been gifted BJP ticket for contesting the Rajya Sabha polls from Madhya Pradesh.

Scindia joined the BJP on Wednesday in the presence of party president JP Nadda and others.

The BJP Central Election Committee met on Tuesday evening to discuss the names of candidates for the Rajya Sabha from various states and included Scindia’s name as one of the candidates from Madhya Pradesh.

In Madhya Pradesh, there are 11 Rajya Sabha seats and three of those seats will fall vacant in April.

One of the seats has been represented by Congress leader Digvijaya Singh while BJP’s Prabhat Jha and Satyanarayan Jatia represent the two other seats.

The last date to file nominations for the Rajya Sabha elections is March 13.

The Rajya Sabha election is set to take place on March 26.

According to reports, Scindia revolted against the Congress high command over party ticket in the forthcoming Rajya Sabha elections.

As no top Congress leaders responded to Scindia’s willingness to fight the Rajya Sabha polls, he turned against his own party.

In his resignation letter, addressed to Sonia Gandhi and posted on Twitter, Scindia wrote: “While my aim and purpose remains the same as it has always been from the very beginning, to serve the people of my state and my country, I believe I am unable to do this anymore within this party.”

It may be mentioned that in 2016 as the chief whip of the Congress in the Lok Sabha during Narendra Modi’s first term, Scindia termed Sonia Gandhi as a “sherni” (lioness) who would make the BJP “repent” for targeting her.