Peace Accord with NDFB & Oct 30 blasts: Where do we stand today?

A section of the high caste Assamese, some opportunist student leaders and politicians have pushed us so much that the word Assamese has become an anathema in Assam 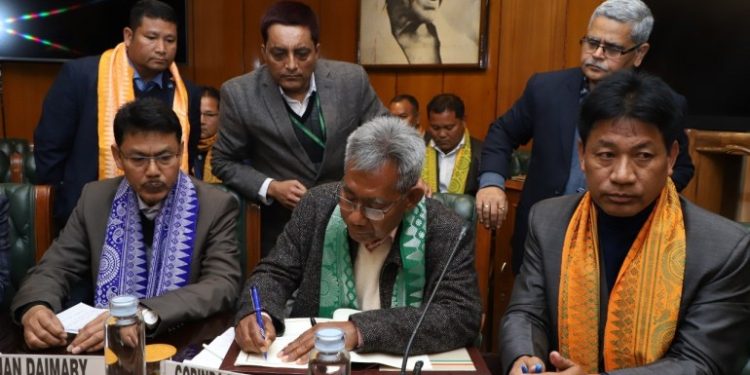 Do you remember the 30th of October, 2008? What a horrendous day was it! That day Assam was rocked by serial blasts in Guwahati, Barpeta Road, Bongaigon and Kokrajhar. In Guwahati itself the explosions ripped through Pan Bazar, Fancy Bazar and Ganeshguri.

All these places were crowded with shoppers and office goers. That day Ganeshguri was a charred place! What a ghastly spectacle it was! In the serial explosions more than 80 people died and about 500 people were injured.

Do you know who did it? From the reports of various investigative agencies we came to know that it was the handiwork of National Democratic Front of Bodoland (NDFB). The mastermind behind this was Ranjan Daimari, the chief of the outfit.

Which organization was in the forefront condemning this? It was the BJP and its other frontal organizations. A spontaneous  bandh was observed next day at Kokrajhar on a call given by the Vishwa Hindu Parishad, the BJP and the Bajrang Dal and schools and colleges were also remained closed in Guwahati.

After a gap of about 12 years the BJP government has signed a peace accord with Ranjan Daimary faction of NDFB besides three other factions of the outfit along with Bodo students’ organization ABSU.

A peace accord with an outfit who killed people with impunity! Now how should we read this development? What are they– the kits and kin of the people who were killed and injured in the blasts–thinking now?

The government is crowning today the perpetrators of the mayhem. Oh, what a change and what a time! There are many sides to it. But the first and foremost question – can you kill ordinary citizens who have nothing to do with your movement or demands? You cannot do it.

If you are fighting against a state and its forces, that is a different thing. In a fight and combat situation there could be casualties on both sides. But here you are indiscriminately killing ordinary and innocent people. The ones killed and injured were no way related to your movement. Then, the government is sitting with you in a negotiation. Should a government negotiate with such killers? They can always do that with the organisations.

Shouldn’t the state machinery bear some neutrality? The top bureaucrats- should they surrender everything to the whims of the wily politicians? What is the role of court of law here? Is our judiciary independent and autonomous or subservient to the government and the ruling party? These are certain basic questions?

Now, let us come to the demand of the Bodo outfits. What happened in four and five decades back is a different thing, but what is happening now? Who are the deprived people in the so called Bodoland? Are they Bodos or non-Bodos? They are definitely non-Bodos. The non-Bodos are second class citizens in Bodoland.

All the time they live in a fearful anxiety. There was a time when Bodos forcefully occupied lands and properties of non-Bodos. Most of the times elections were rigged in favour of parties belonging to Bodos in the area. And this in a place where non-Bodos can easily outnumber the Bodos. How justified is this?

Now one has to see the timing of the Bodo peace accord. If we don’t bring the context of the CAA, we shall fail to understand this development. Since the bringing of the CAA, the BJP government is doing everything possible to steam off the CAA movement. And while doing this they have indulged themselves in all know of machinations and dividing people never before only for their electoral gains.

What exactly are they doing by signing this accord? They have paved the way for another division of Assam. Already the leaders who signed the accord have said it publicly that this is the foundation of a separate state.

So this is a new gift to the Assamese by the BJP! And still a section of the Assamese go on supporting the BJP. In a state of multi community and multi ethnicity, it is but natural that each community should have equal opportunities of jobs and development. But, to placate one community you shouldn’t act against the interests of another community for partisan ends. But this is what this government is doing.

This government is decidedly against the linguistic nationalism of Assamese people. So they are doing everything to erode the base of this nationalism. What is CAA? It is nothing but a polarizing tool. And particularly for Assam, it is a tool for weakening Assamese nationality.

Their main problem is they have not yet been able to create a division among the Assamese people on the basis of religion. However, they have to a large extent succeeded in keeping many tribal people away from the CAA movement. By doing this they have further alienated these communities from the Assamese.

Paresh Malakar is a commentator based in Guwahati. Views expressed are personal.