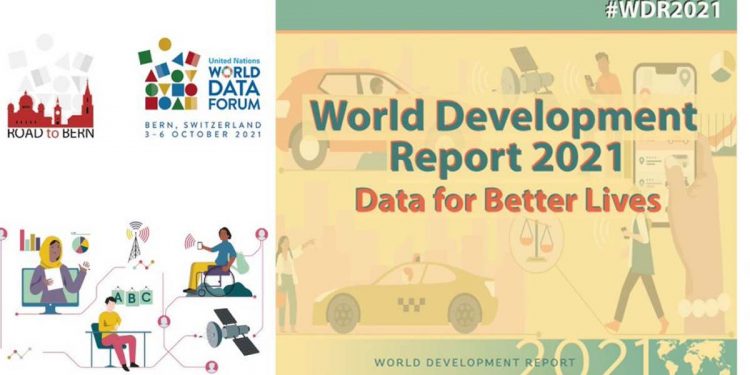 This article is exclusively based on the World Development Report published by the International Bank for Reconstruction and Development/The World Bank, 2021 titled “Data for better lives”.

I wish to mention a few points about data as data is important in our lives. When a baby is born the baby’s weight is immediately measured and from time to time the baby’s height and weight are maintained.

This is a simple example of the importance of data. When a person earns whether through self-employment or wage –employment earning and expenditures are accounted for which is part of data.

Like this, there are numerous examples of the importance of data. Anyway points based on the Report are highlighted below.

The publication itself has mentioned the term data is difficult to define. It is observed from the Report that at the turn of the nineteenth century, English sociologist Seebohm Rowntree interviewed a sample of families with the objective of better understanding the poverty experienced not only by those he interviewed but also by everyone in the town of York.

He observed that poverty was prevalent outside of London and demonstrating that people cycled in and out of poverty over the course of their lives.

It has meant different things at different times, and in different disciplines. Originally simply defined as facts, the term slowly came to mean facts as they related to mathematical representations.

Despite the changing nature of data, most people would not have thought of things such as pictures, sounds, or words as data even as recently as a few decades ago. But times have changed, and major advances in computing power, together with innovative thinking, have resulted in, for example, radiomics, the science of converting medical images into data that, once structured and analyzed, can help improve a patient’s diagnosis and prognosis.

Similarly, sound can now be digitized and analyzed to, for example, explore and better understand the galaxies. In very general terms, Carrière-Swallow and Haksar point out that “data can be quantitative or qualitative in nature, and may be stored on analog (that is, paper, stone tablets) or digital media.”

This view conforms with how this report uses the term. Indeed, some data are still collected on paper in many countries. Processing these data — digitizing them and entering them in a spread-sheet or database—allows them to be more easily analyzed, but a digital format is not necessarily an attribute of data.

The Organisation for Economic Co-operation and Development (OECD) states broadly that data are “characteristics or information, usually numerical, that are collected through observation.” More specifically, data is “the physical representation of information in a manner suitable for communication, interpretation, or processing by human beings or by automatic means.”

Data can be the result of digital transactions or simply by-products of our daily digital lives. According to the Report, data must be processed, structured, and analyzed to be converted into information.

An expansive description of data that resonates well with how the term is used in this report is provided by the UK National Data Strategy: “When we refer to data, we mean information about people, things and systems. . . . Data about people can include personal data, such as basic contact details, records generated through interaction with services or the web, or information about their physical characteristics (biometrics) — and it can also extend to population-level data, such as demographics.

Data can also be about systems and infrastructure, such as administrative records about businesses and public services. Data is increasingly used to describe the location, such as geospatial reference details, and the environment we live in, such as data about biodiversity or the weather. It can also refer to the information generated by the burgeoning web of sensors that make up the Internet of Things”.

According to the publication, the oldest censuses date back to at least 2000–1000 BCE to ancient Egypt, Greece, and China, which enumerated people, livestock, and food items. The Romans fielded a census of men and their possessions every five years—a practice referenced in the Christian Bible.

Record-keepers in the Incan Empire between 1400 and 1500 CE counted people, dwellings, llamas, marriages, and potential army recruits. Rulers and administrators gave priority to counting sources of wealth and power considered of strategic importance (the data were kept secret from the public).

They collected information first and foremost on property for taxation and men for military recruitment and labour force purposes.

Before conclusion, I wish to mention that this article based on a secondary source viz., World Development Report 2021published by the International Bank for Reconstruction and Development / The World Bank, 2021 titled “Data for better lives” is an authentic source so the information can be used for academic purpose even for research studies.

[The author, Dr Shankar Chatterjee, is a former Professor & Head (CPME), NIRD& PR (Govt. of India), Hyderabad. He can be reached at [email protected]]