The public refrigerator was inaugurated by Jorhat SP Vaibhav Nimbalkar 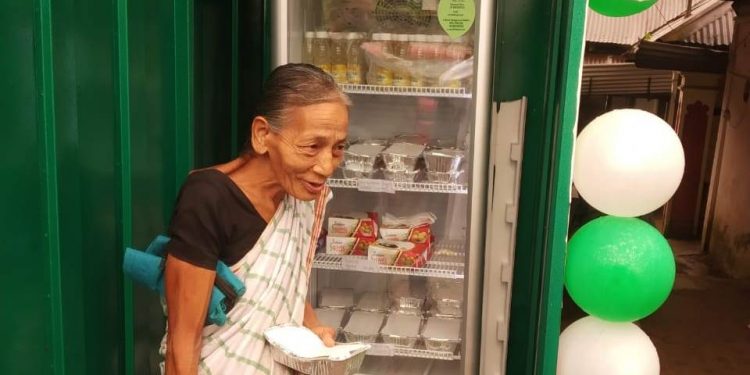 An old woman collecting food from the community fridge in Jorhat on Sunday.

The Jorhat chapter of Feeding India has taken its mission of eradicating hunger, malnutrition and food wastage a step ahead by installing a Happy Fridge, the first community fridge in the Northeast, at Kenduguri in the district.

The public refrigerator on Sunday was inaugurated by Jorhat superintendent of police (SP) Vaibhav Nimbalkar.

Sajib Boruah, a member of Feeding India, Jorhat chapter, said that anybody could come and keep food here and anyone can come and partake of anything he or she desires from the fridge.

“Today on its inaugural run an old woman helped herself to some food from the fridge,” Boruah said.

The refrigerator which has been given by the  Delhi headquarter of Feeding India has been installed in the premises of Sanjay Jha,  who will bear the cost of electricity,  take care of its security and check on the food regularly.

The Jorhat chapter of Feeding India is headed by Taran Soni as the city head and Dwij Bhargav as the city president.

His team of about 200 volunteers known as Hunger Heroes, is kept busy collecting excess food from parties and wedding receptions and taking these to the needy and hungry.

“We have received an overwhelming response from the people of Jorhat, ” he said.

Began in 2014, Feeding India, a non profit organisation has branches in 71 places of India and about 10500 volunteers.

Earlier Feeding India carried out a Swachch Bharat Abhiyan with ONGC at the ISBT and also fed 250 people.