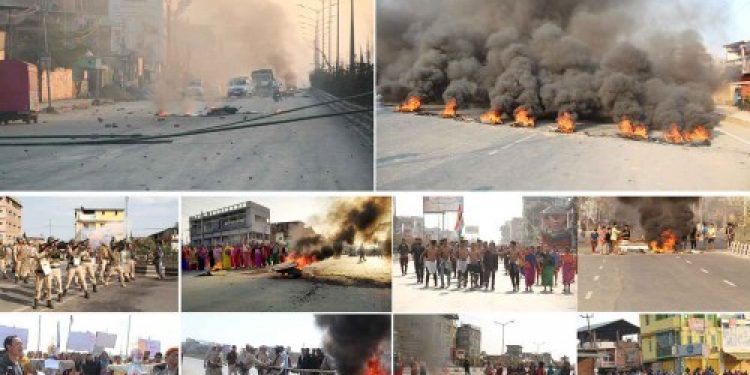 Joint up image of protest sites across Manipur on February 12, 2019. Image courtesy: ifp.co.in

Hundreds of women vendors of Manipur defied curfew on Tuesday and continued their sit-in protest in Imphal demanding withdrawal of the controversial Citizenship (Amendment) Bill 2016.

Besides, a group of young men also staged a nude protest in front of the Bharatiya Janata Party (BJP) office near the Manipur University.

Also read: Manipur on the boil over possibility of citizenship bill getting passed in RS

In a bid to rein in the worsening situation, the district magistrate of Imphal West ordered to ban circulation of images and reports of the movement via internet.

The police had to fire teargas shells and mock bombs to disperse people and prevent them from coming out of their houses to join the sit-in protest.

Many of the protesters also burned effigies of the Prime Minister and the chief minister, while women took out torchlight marches in various many parts of the State.

Meanwhile, chief minister N Biren Singh, who is camping in New Delhi, appealed to the people to remain calm as everything possible is being done to halt passage of the Bill in the Rajya Sabha on Wednesday.