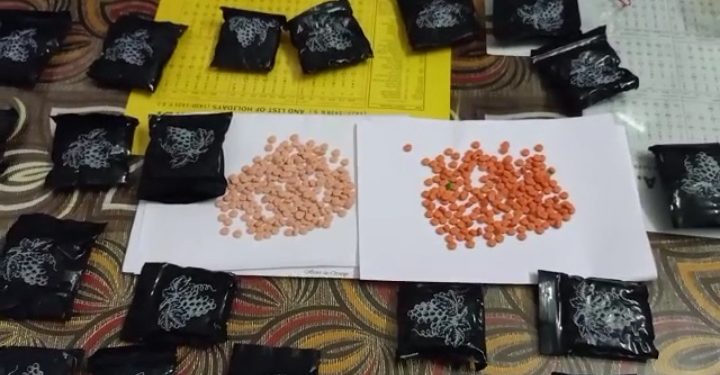 The police have arrested two drug peddlers and recovered 22 packets of Yaba from Baragol village along the Indo-Bangla international border in North Tripura.

The accused have been identified as Ahmed Choudhury (18) and Bishal Sabdakar (19) of Kadamtala in North Tripura district.

The duo will be produced in the Dharmanagar district court on Tuesday.

According to police sources, the two youths were smuggling out a huge quantity of Yaba tablets from the state to neighbouring Bangladesh through the Baragol-Maheshpur road.

The intelligence department along with the police conducted an operation in Baragol on Sunday night.

The police apprehended the two drug peddlers as they were coming from Baragol towards Meheshpur on a two-wheeler at around 10 pm on Sunday.

Kadamtala Police Station officer-in-charge Krishnadhan Sarkar said, “The youths were carrying a total of 4,400 Yaba tablets in 22 packets, which they planned to smuggle to Bangladesh through Maheshppur.”

The market value of these tablets is around Rs 22 lakh.

A case has been registered against the duo at the Kadamtala Police Station under Section 37 of the Indian Penal Code and the Narcotic Drugs and Psychotropic Substances Act, 1985.

Meanwhile, the police are also interrogating the two drug peddlers.