Clash broke-out between the police and villagers of Kamal Nagar in Tripura’s Sepahijala district over drive against illegal ganja (cannabis) plantation on Friday.

Villagers allegedly attacked the personnel of police and Border Security Force (BSF) deployed in the area during the drive on Friday afternoon.

Notably, while the security personnel were destroying the ganja plantation in the village, some villagers allegedly attacked them with bamboo sticks and other sharp weapons.

This compelled the security personnel to fire tear gas shells to disperse the agitating crowd.

“Personnel of the police and BSF’s 74th Battalion, officials of the Forest Department and narcotics Department had jointly raided the village and destroyed ganja plantation worth over Rs 1 lakh,” said Sonamura SDPO – Banaj Biplab. 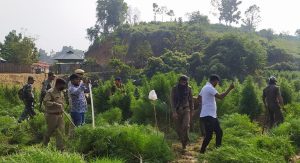 “Some of the villagers attacked and also lobbed homemade bombs towards the team of security personnel,” added the Sonamura SDPO.

The village of Kamal Nagar, where the raid took place on Friday is very close to the India-Bangladesh border.

Notably, a large section of farmers in the Sepahijala district is hugely dependent on production of ganja.

The police in Sepahijala and other security forces often raid the villages in the district and destroy the ganja plantation.