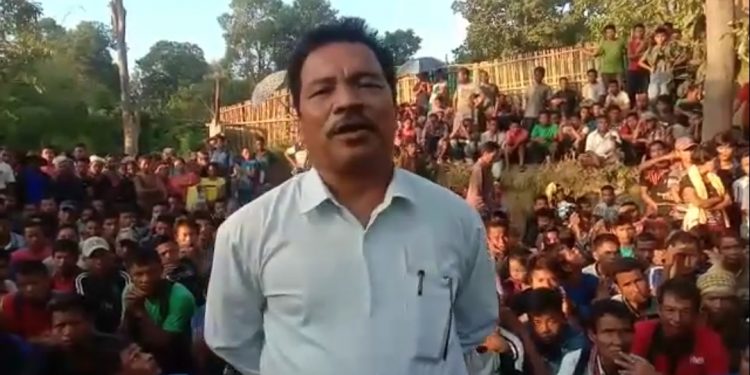 He said if the government will not sort out the refugee issue immediately he will resign from the MLA’s post.

Prem Kumar Reang is the MLA from Kanchanpur, where all the Bru refugee camps are situated.

From October 1 last, the central government has stopped the ration supply in refugee camps.

The Bru refugees are agitating against the government decision.

Since the last four days, they blocked the Anandabazar-Dashda road.

The situation is alarming in Kanchanpur subdivision.

Government has imposed curfew at some places of Kanchanpur.

Section 144 CrPC in the 200-meter surroundings of the Ananda Bazar Food godown has also been imposed.

In this situation, Prem Kumar Reang said, “As a local MLA I don’t  have any enough scope to do anything in this matter.”

“But it is difficult to stay far from this situation. People are questioning me. I am also from the same community,” he added.

“My community people are dying in starvation and if I keep silent it will be a shame for me,” he also said.

He said Reangs will return to Mizoram but they will have to be fed first.

He urged the government to mitigate the problem as early as possible.

Prem Kumar Reang is an MLA from IPFT, which is an ally of BJP in Tripura.

The ongoing road blockade movement of the Reang refugees has further intensified over the reported death of an elderly lady and a child in the refugee camp.

The refugee leaders claimed that they have died due to hunger as the government has stopped the supply of ration among the refugees.

The government sources have confirmed the deaths but yet to find out the real cause.