The BJP-led Tripura government has miserably failed to control violence in the State: Manik Sarkar 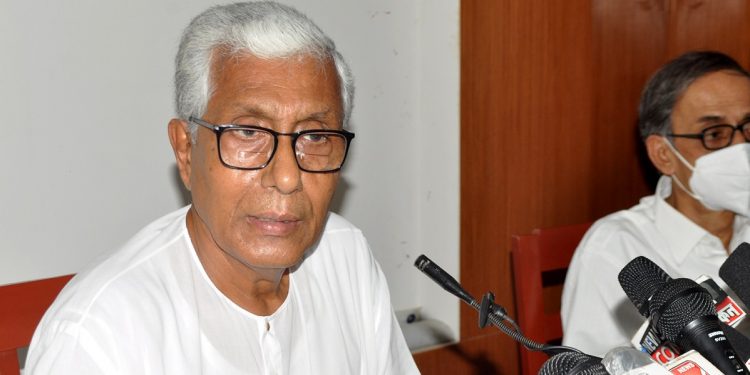 A Left Front led by opposition CPI-M will meet President Ram Nath Kovind and Prime Minister Narendra Modi to discuss the issue of ‘attacks’ on its party workers allegedly by the workers of the ruling BJP.

This was informed by former Tripura Chief Minister and politburo member of the CPI-M – Manik Sarkar in Agartala on Sunday.

He said that the Left Front will take up the issue with President Kovind and PM Modi as Tripura Governor Ramesh Bais and Chief Minister Biplab Kumar Deb “completely failed to control violence and attacks on opposition leaders and supporters across the state”.

Manik Sarkar said: “The BJP-led government in Tripura and Chief Minister Biplab Deb, who also holds the Home portfolio has failed miserably to control violence in the State.”

“The police in the State have turned into a puppet of ruling party and no action has been initiated against the violators of law,” Manik Sarkar added.

“CPI-M State Secretariat body met Chief Minister Biplab Deb and apprised him about the violence and attacks on our party workers across the state. CM assured that necessary and immediate steps would be initiated. Later, we also met Governor Ramesh Bais and also apprised him about the law-and-order situation in the State. Governor assured us that no violence and attack will take place. But nothing happened,” Sarkar said.

“In a span of two years between June 28, 2019 to June 25, 2021, 9 incidents of mob-lynching and custodial deaths took place across the state. This is really worrying,” Manik Sarkar added.

“Even after apprising the Governor about the present situation in the State, there have been at least sixty incidents of attacks on CPI-M party workers,” said Sarkar.