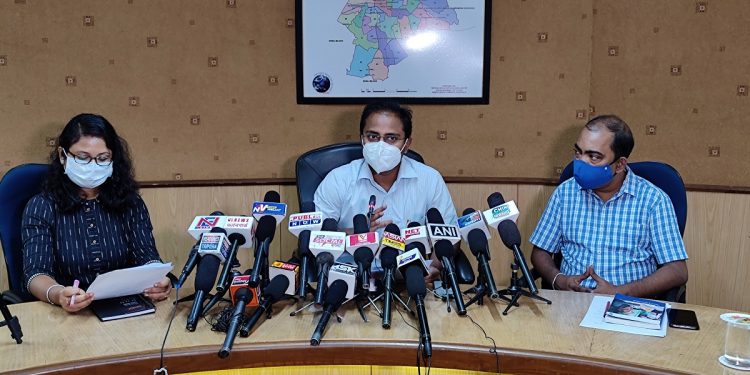 Just a couple of days after the Tripura High Court questioned the vaccination data provided by the State Government, the Tripura Health Department has said that the figures provided earlier were accurate.

Dr Siddharth Shiv Jaiswal, Mission Director of the National Health Mission (NHM), Tripura said that he stands by the data on COVID-19 vaccination of eligible age groups, which were earlier reported by the media.

He said, “The data provided to the High Court was based on the arithmetic projections. Later, we did ‘brainstorming’ on the target population involving census reports, UIDAI data etc., and settled upon the revised estimated target. This is a much more solid data and has been corroborated with the target of the Government of India”.

He added that an affidavit with all the details will be submitted to the High Court on the next date of hearing.

Also read: If TMC comes to power in 2023, Tripura will get a tribal CM: State party president Ashish Lal Singh

Earlier, the Tripura High Court sought clarification from the state government for disseminating “inaccurate information” on vaccination of more than 80 per cent of eligible persons and 98 per cent of people above 45 years receiving the first dose of Covid-19 vaccine.

The Court observed that two local newspapers on June 25 quoted National Health Mission, Tripura mission director Siddharth Shiv Jaiswal as saying that around 80 per cent population of all eligible age groups and 98 per cent people above 45 years have received the first dose of Covid-19 vaccine.

However, the division bench said that neither of these two claims was accurate.

“As per the government affidavit, the entire eligible population of over 18 years in the state is close to 26.86 lakhs. There are approximately 12.36 lakhs people over 45 years,” the court observed.

Meanwhile, just a day after the Tripura government said that 138 cases of Delta Plus variant of COVID-19 were found in the state, the Centre has refuted the claim saying that no case of the Delta Plus variant has been detected in Tripura.

“152 samples were sent from Tripura to NIBMG Kalyani for Whole Genome Sequence (WGS). The random samples were of people who tested RT-PCR positive between April and May 2021…There was no case of Delta Plus reported among an aforementioned lot of sequenced samples”, the union health ministry said.

This statement from the union health ministry comes just a day after Tripura health department officials briefed the media in Agartala saying that 138 cases of Delta Plus variant were found among 151 COVID samples, which were sent to Kalyani laboratory in West Bengal for testing.