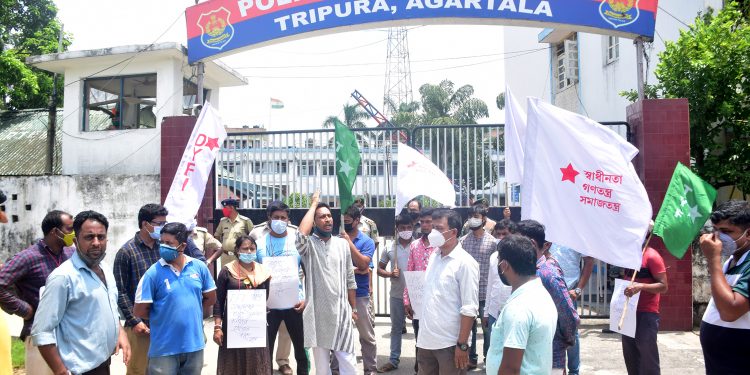 Miscreants enjoying the support BJP the SFI state secretary and his brother at their residence in Badharghat in Agartala.

They also expressed their anger against the police and demanded immediate arrest of the perpetrators.

“Opposition leaders and workers are being assaulted across the state. There is so much political terror, but no arrests,” DYFI state secretary Nabarun Deb said.

The protestors said that the police have completely failed to establish law and order in the state and violence continues to take place during the curfew.

“We fail to understand why the police do not take action against the miscreants”, Deb added.

He said that there has been rampant violence since the BJP-led government came to power in Tripura.

“Left-wing youth organizations are conducting blood donation camps and providing relief materials to people during the ongoing Covid-19 pandemic. They are being attacked by miscreants for helping people”, Nabarun said.

“These miscreants supported by BJP are also not allowing students and youths to join DYFI and SFI,” said Amalendu Debbarma

Meanwhile, a case has been registered with the West Agartala police station