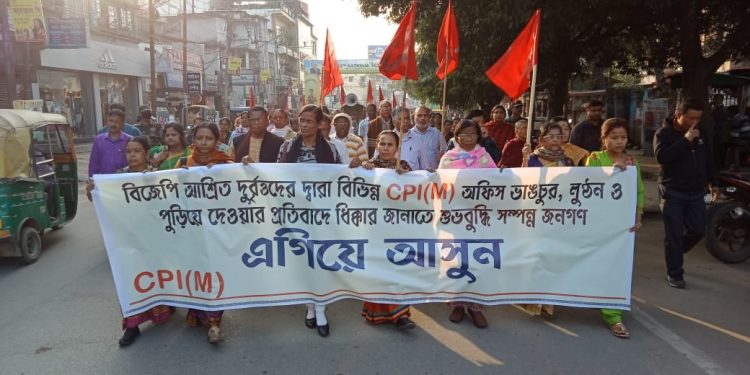 Tripura CPI-M on Friday organized a massive rally in Agartala protesting the torching of its party offices.

As many as three party offices of the CPI-M were burnt down by unidentified miscreants over a period of three days.

The three party offices which were burned down and ransacked are located at Narshingarh, AD Nagar and Dhaleswar.

The CPI-M has raised fingers towards the BJP for burning of their party offices.

CPI-M state secretary Gautam Das alleged before media that the attack on their party offices and burning of party offices has been done under the instigation of chief minister Biplab Deb.

He also questioned why the chief minister is silent after all these incidents.

Earlier, former chief minister Manik Sarkar visited all the party offices which were burnt down.

Sarikar told the media that ‘BJP can only destroy, they can’t create anything’.

He said CPI-M is suffering with internal fights.

And the attack on party offices and set fire on them is the result of internal fight between the leaders.