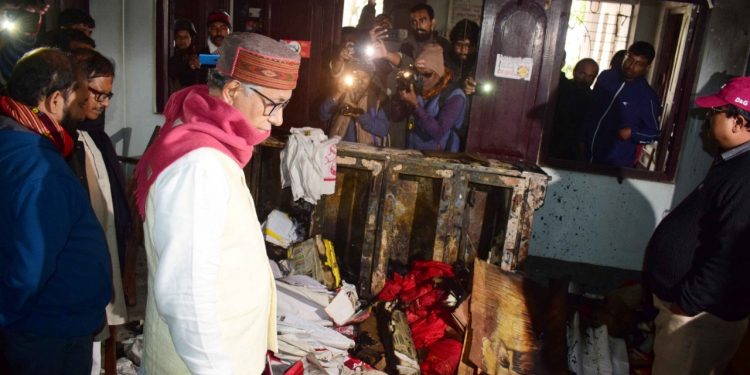 Former Tripura CM Manik Sarkar and other party leaders rushed to the office.

The party office of CPI-M located at Dhaleswar in Agartala was set ablaze by miscreants on Wednesday night.

The people behind the incident, that took place late last night, are yet to be known.

Locals said some unidentified people torched the office at about 1:30 am by sprinkling petrol on it.

The miscreants ransacked the office building and damaged the books on Marxist literature and left politics before setting it on fire.

Five almirahs with books and furniture of the office were burnt down in the incident.

Locals, who first witnessed the incident immediately informed the fire brigades, who reached the spot and bring the fire under control.

Four fire tenders were pressed into the service to extinguish the blaze.

Former chief minister Manik Sarkar and other party leaders rushed to the office and take stock of the situation.

When asked who might be involved in the incident, Sarkar said, “The area, where such an incident has happened, falls under the constituency of the chief minister. I have nothing more to say on this.”

CPI-M leader Amal Chakraborty pointed the needle of suspicion at the BJP.

He said the incident was a ‘direct assault’ on democratic rights enjoyed by the people and his party.

The party has filed a complaint against unidentified BJP workers in the connection with the incident.