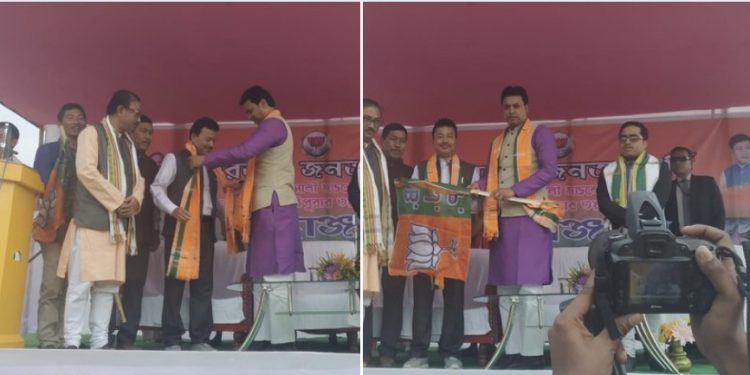 Sharing images of the moment of Tripura joining the BJP, chief minister Deb on his Twitter handle claimed Patiram Tripura joined the party after being inspired by Prime Minister Narendra Modi’s work and the party’s vision.

Chief minister Deb tweeted: “I welcome Sri Patiram Tripura ji, twice Member of District Council from CPI-M, who inspired by PM @narendramodi Ji’s work & our vision has decided to join @BJP4India along with his supporters.”

“Together we shall work for the welfare of 37 lakhs people of Tripura,” Deb hoped.

I welcome Sri Patiram Tripura ji, twice Member of District Council from CPI-M, who inspired by PM @narendramodi Ji's work & our vision has decided to join @BJP4India along with his supporters.

Together we shall work for the welfare of 37 lakhs people of Tripura. pic.twitter.com/OsM41XTFva

It has been reported that the Tripura BJP under the leadership of chief minister Biplab Deb has been trying to make an inroad to the Tripura Tribal Areas Autonomous District Council (TTAADC).

The TTAADC was in trouble as 15 of its members on October 21, 2019, submitted a ‘no-confidence’ notice to governor Ramesh Vais for dissolving the Council’s Executive Committee.

The members submitted the notice to the Tripura governor at the Raj Bhavan, Agartala.

It was a major setback for the Communist Party of India-Marxist (CPI-M) as the TTAADC was ruled by the party.

Political analysts said the BJP has been trying to capture the TTAADC, which is scheduled to go for election in April next year.

Patiram Tripura, ADC member from Raima Valley in Dhalai district, was also one of the rebel members.

He had said, “A section of the council is aggrieved against Chief Executive Member Radhacharan Debbarma. Nearly no one turned up at the last ADC council session.”

“I don’t know what were their grievances. But some of them sought my support to initiate a no-confidence motion. I gave my support. We have met the Governor and informed this thing,” added Tripura.

“The decision was taken since the existing Executive Committee of the TTAADC has failed to fulfil the minimum needs of the people living in TTAADC areas,” he further said.

All the members, who sought no-confidence motion against CEM Debbarma were elected on CPI (M) ticket in 2015, barring Joy Kishore Jamatia, who was expelled from the communist party two years back for ‘immoral activities’.