The newly elected Chief Minister of the state discussed at length various issues relating the state with these central leaders.

Though details of the meeting are awaited, sources close to the Chief Minister disclosed that the issue of infiltration from Bangladesh and problems created by fundamentalist organizations were taken up during the discussion with the External Affairs Minister.

Deb also discussed with Swaraj, the issue of erecting border fencing along 75 km length of the unfenced area along Indo-Bangladesh international border in the State.

The Tripura Chief Minister called on the Union Railways Minister Pijush Goyal and requested him to expedite the extension of broad gauge railway line up to the state’s southernmost sub-divisional town of Sabroom.

He also urged Goyal to launch a separate railway division for Tripura besides granting other railway-related facilities for the State.

Deb also held discussion with Union Minister for Industry and Commerce Suresh Prabhu on the issue of inviting investments in Tripura so that the acute unemployment problem in the State can be addressed and infrastructure can be created for setting up industries. 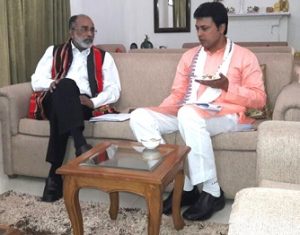 The Chief Minister is also expected to meet Union Home Minister Rajnath Singh among others later on Wednesday.

Deb left for the national capital early on Tuesday.