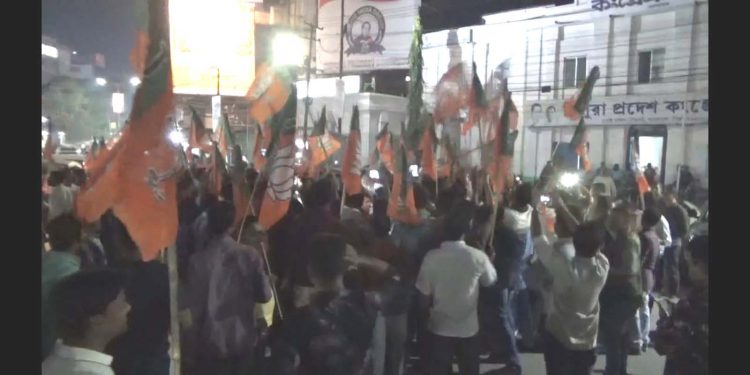 Youth wing of the Tripura BJP stages protest in front of the Congress Bhavan at Agartala on Saturday. Image credit - Northeast Now

The youth wing of the Tripura BJP staged protest in front of the Congress Bhavan at Agartala on Saturday and burnt the effigy of former party president Rahul Gandhi.

The activists and supporters of the Tripura state unit of the Bharatiya Janata Yuva Morcha (BJYM) led by president Tinku Roy also took out a protest rally at Agartala.

“But two days back, the Supreme Court ruled out all the allegations.”

“The apex court on Thursday dismissed a review petition seeking probe into the Rafale deal to procure 36 fighter jets from French company Dassault,” he added.

Tinku Roy also said they have protested in front of the Congress Bhavan against the baseless allegations leveled by Rahul Gandhi.

However, the Congress did not take the protest by the BJP youth wing lightly.

At 8 PM, the Congress workers along with supporters gheraoed the Agartala office of the Sub-divisional Police Officer (SDPO).

The Congress workers and supporters alleged that the BJP youth wing protestors attacked the Congress Bhavan and the police remained “silent spectators” during the incident.

Congress leader Sushanta Chakraborty said, “BJYM workers and supporters attacked the Congress office in front of police. It is shameful for chief minister Biplab Deb and his party.”