Three held in Tripura for roughing up indigenous woman in public 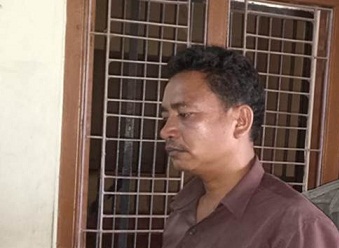 One of the accused Dasharath Reang. Photo Credit - newsbuzzinfo.com

A 35-year-old indigenous woman was severely thrashed in public in Tripura’s Khowai district last month. In this connection, three men were arrested on Friday.

A report published in the The Indian Express stated that Jaymanti Reang, a mid-day meal worker, was beaten in public on her way back from a fair price shop on July 17 last. She registered a complaint at Mungiakami Police Station on Wednesday, said Kishore Uchoi, the officer-in-charge of the station.

The report further quoted Uchoi as saying, “She received grievous injuries during the assault. The victim registered a complaint with Mungiakami Police Station on August 8 against three youths. We have arrested all three of them.” Jaymanti was hospitalised for a couple of days after the incident. She lodged the complaint after being released from the hospital.

The arrestees– Dasharath Reang (50), Labkumar Reang (45), and Charania Reang (40) – were accused of assaulting the woman at Hazrapara area. While Dasharath was arrested right after the complaint was filed, two others were arrested earlier on Friday.

Meanwhile, a video of the incident has gone viral on social media where Jaymanti is seen being beaten by the accused youths. The police officer said investigation was going on, adding that they would take into consideration any such videographic evidence in the probe.

Reacting to the incident, the Pradesh Congress vice-president Tapas Dey said women are not safe in Tripura. He said he didn’t find any change in the quality of governance from erstwhile Left Front rule in the incumbent
BJP-IPFT coalition regime. However, BJP spokesperson Mrinal Kanti Deb beg to differ and claimed that the law and order situation has improved in Tripura in the past five months and said women used to face trouble to lodge FIR during the Left rule. Deb also credited the police for taking prompt action.

Tripura was earlier ranked among States with highest records on crime against women in National Crime Records Bureau (NCRB) report in 2010, 2011 and 2012. Conviction rates on such crimes in the State stand at 24.7 per cent.