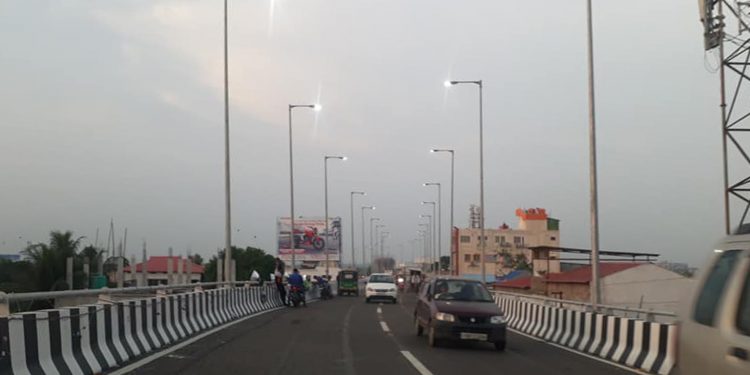 Agartala’s first fly-over was inaugurated by the students of Narsingarh Blind School on Friday afternoon.

The 2.26-kilometre long flyover has been constructed with an estimated budget of Rs 250 corers.

The bridge runs from Drop Gate to Fire Service station in Chowmuhani.

The foundation of the bridge was laid in 2015 by then Tripura Chief Minister Manik Sarkar.

The CPI (M) government completed almost 90 per cent construction work of the bridge.

The remaining 10 per cent of work was completed after the BJP-led coalition government came to power in 2018.

The construction of the bridge was marred with a lot of controversies.

Corruption charges of high degree were levelled against a number of retired Tripura PWD officials.

On Wednesday (October 2), five PWD officials of the state were charge-sheeted in a corruption case related to the construction of the fly-over and a steel bridge.

A detailed charge sheet of 527 pages with 78 seizure documents and files were also submitted at in the court.

As per allegations, there were irregularities while engaging consultant and contractors during the construction of the 2.6-kilometre flyover.

Allegation of excess expenditure to the tune of Rs 19 crore was also reported in the project for constructing the steel bridge.