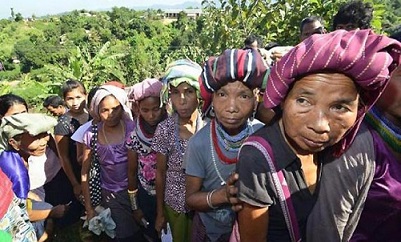 After more than two decades, 32,876 Reang tribals are getting ready to return home in neighbouring Mizoram, setting aside all uncertainties.

“The tribals are now in ‘homebound’ mood. After a four-sided agreement was signed last week between the Centre, Mizoram, Tripura and the Mizoram Bru Displaced People’s Forum (MBDPF), our much-awaited hopes will be realised,” refugee leader Bruno Msha told a news agency.

Msha, who is the General Secretary of MBDPF, said: “Our refugee life will now be over and we will now lead a normal life as Indian citizens from next month. Uncertainty over the future of our children is also going to be resolved.”

After a series of meetings and persuasions, the representtives of the four-parties signed the document on July 3 in New Delhi, in the presence of Home Minister Rajnath Singh, Tripura Chief Minister Biplab Kumar Deb, his Mizoram counterpart Lal Thanhawla and the MBDPF members. The MBDPF is the apex body of the refugees.

Msha said that as per the agreement, the refugees, comprising 5,407 families, would start returning to their homes from August 16 and the multi-phase repatriation would be completed by September 30.

After their return, the Reang tribals would be settled in the three districts — Kolasib, Lunglei and Mamit — in western Mizoram where they used to live.

The Reang tribals, locally known as “Bru”, have been living in six makeshift camps in north Tripura’s Kanchanpur and Panisagar sub-divisions, adjoining Mizoram, since October 1997 after they fled their homes in western Mizoram following ethnic strife. The trouble in the state started after a Mizo forest official was killed.

The agreement has finalised a six-point benefit package for each refugee family. It includes financial aid of Rs 4 lakh; a monthly allowance of Rs 5,000; Rs 1.5 lakh for building a house and free rations for two years.

A monitoring committee headed by Special Secretary (Internal Security) of the Ministry of Home Affairs has been constituted with officials from Tripura and Mizoram and representatives of MBDPF to supervise the repatriation process and the settlement of the refugees.

Mizoram Home Department Joint Secretary, Lalbiaksangi, on Monday held a meeting with the concerned deputy commissioners and officials to formulate strategies about the home-coming of the Reang tribals.

Tripura Relief and Revenue Department Joint Secretary, Sankar Chakraborty, said that during the repatriation the state government would provide security and logistical supports including transportation to the refugees.

“Around Rs 360 crores have been spent to provide relief and basic services to the refugees since October 1997. The central government has sanctioned the funds,” Chakraborty said.

Despite several initiatives by the Mizoram government to bring the refugees back, they have been reluctant to do so unless their demands for food and security were met.

Union Home Minister Rajnath Singh and top officials of the MHA have visited the refugee camps in north Tripura and Mizoram many times and urged both the Mizoram government and the refugees to end the stalemate over the repatriation.

The Supreme Court had last year directed the MHA and the Mizoram and Tripura governments to jointly work for the return of these tribal refugees to their home state.