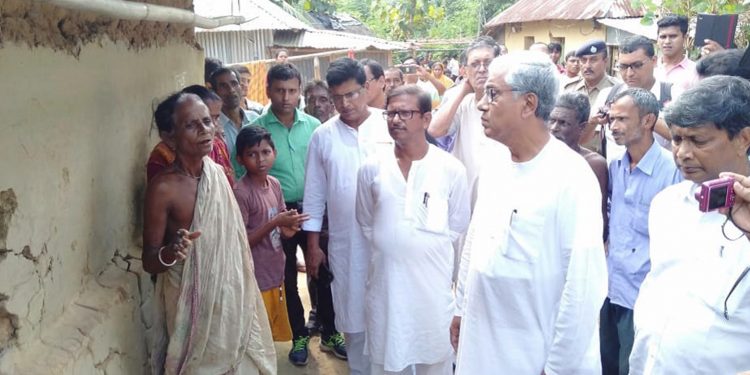 For CM Manik Sarkar in conversation with the victim's mother. Image: Northeast Now

Former Tripura Chief Minister Manik Sarkar on Sunday demanded a judicial inquiry into the recent ‘custodial death’ of a 19-year-old youth in the state.

The former CM met the victim’s mother and demanded a judicial inquiry into the incident.

“I met the victim’s mother and got to know about the tragic incident. This is pathetic. I demand a judicial inquiry into the incident,” Sarkar said.

A team of lawyers met Tripura DGP Akhil Kumar Shukla and demanded an impartial investigation into the on ‘custodial death’ of the 19-year-old youth.

Gomati District superintendant of police Abhula Reddy, meanwhile, informed that a magisterial inquiry into the alleged custodial death is going on.

“If the police officers alleged to be involved in the case are found guilty in the inquiry, they would be punished duly,” Reddy said.

Mangal Das, who was arrested by the Radhakishorepur police for thievery on October 23, died in Gomati District Hospital on October 31.

His mother Arati Das filed a case against Radhakishorepur police, alleging that her son died due to police torture.