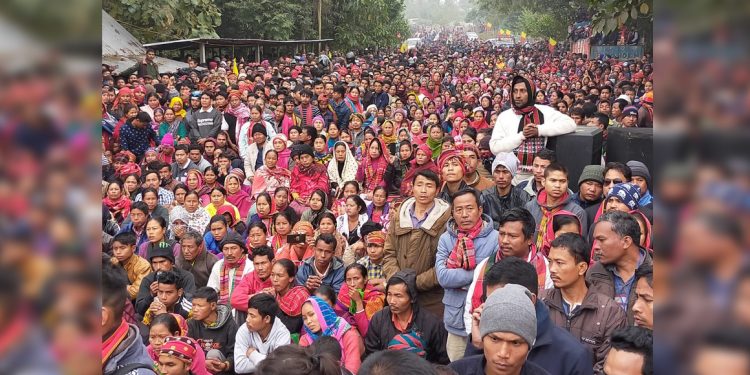 The rally at Khumlung has been considered as the biggest anti-CAA protest rally organized in Tripura.

It was an apolitical rally with mass support from the indigenous people who joined hands with the former Tripura Congress president.

The Citizenship Amendment Act (CAA), brought by the BJP-led NDA government at the Centre, came into effect across the country from Friday.

Pradyot, who has been vocal against the CAA, recently launched an apolitical organization – Indigenous Progressive Regional Alliance (TIPRA) – to voice against the new citizenship law.

He also filed a petition against the law in the Supreme Court.

Saturday’s rally was organized under the banner of the TIPRA.

According to sources, the response of people towards the call of the Tripura royal scion raised eyebrows of the ruling Bharatiya Janata Party (BJP) ahead of the autonomous district council election where the CAA issue would be an important agenda.

Sharing a few images of the rally, Pradyot on his Twitter handle stated: “Huge response to my Rally today in Tripura! United we fight together we never surrender our identity!”

Pradyot said, “When various problems have hit the people, the present (BJP-led) government is trying to implement the CAA.”

Huge response to my Rally today in Tripura ! United we fight together we never surrender our identity! pic.twitter.com/7xSaBlHelh

Pradyot also said he left the post of state Congress president for the interests of the people of the state.

He said, “The CAA will put the future of the indigenous people in danger.”

Debbarma also said, “In Tripura, the indigenous people are already under threat and the CAA will create more trouble for them.”

He also said while the indigenous people raise his voice it is suppressed or it is termed as “communal”.

However, the royal scion appealed to the people to maintain peace and tranquility.