Election Commission of India (ECI) has deferred the date for polling of the Tripura East (ST) Parliamentary Constituency by five days.

The ECI on the basis of ground reports apprehending massive violence and to take additional measures to improve the situation conducive for holding free and fair election has taken this decision. 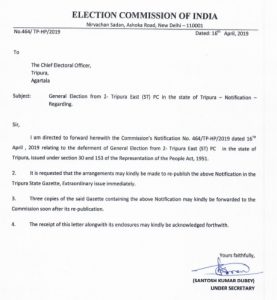 In a new notification by the ECI to the Chief Electoral Officer, Tripura it was informed that on the basis of the reports of CEO and the Special Police Observer that the prevailing law and order in the 2-Tripura East (ST) Parliamentary Constituency is not conducive to hold free and fair election on the scheduled date of April 18.

,Moreover, it was informed that the returning officer of that seat in his report has also expressed similar concerns and that miscreant elements may thwart the polling process.

So in such a situation the ECI having considered the reports from various sources decided to defer the date of polling for the Tripura East seat from April 18 to April 23 so that in these five days time additional measures can be taken and improve the law and order situation with hope to make it conducive for holding free and fair election.

Meantime, as the information about deferring of the polling date started spreading opposition as well as the ruling BJP has started taking credit for the decision and welcomed the move of the ECI.

While the Opposition Congress and CPI-M viewed that the ECI has take its complaints about massive rigging in the first phase polling day on April 11 for the Tripura West seat and hence taken this measure the ruling BJP claimed that this is the outcome of their complain to CEO in which they apprehended massive violence in the next polling day.

However, the CEO Tripura Sriram Taranikanti said that the date has been deferred for improving the security cover and to avoid any type poll violence.