Another braveheart from Tripura has been martyred during a militant attack in Jammu and Kashmir.

The braveheart has been identified Mangaram Debbarma, who served as a Sub-inspector of Central Reserve Police Force (CRPF).

He was martyred as a group of militants attacked a CRPF party in the Lawaypora area on the outskirts of Srinagar city on Thursday afternoon.

During the attack, two CRPF men were killed including Mangaram Debbarma while two others were injured.

The other CRPF man, who was also martyred, has been identified as constable Ashok Kumar.

The injured CRPF personnel were shifted to the 92 Base Hospital.

According to the Inspector General of Kashmir, Vijay Kumar, Lashkar-e-Taiba was behind the attack.

Mangaram Debbarma was posted in the 73 Battalion of CRPF as a Sub-inspector.

He hailed from Taidu village of Gomoti district in Tripura. 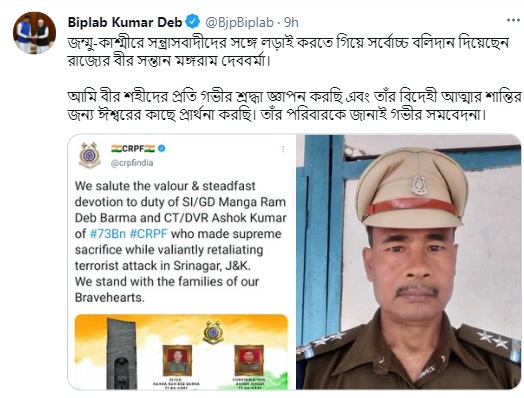 According to sources, the CRPF personnel were engaged in road opening party duty on Srinagar-Baramulla National Highway while the Pakistan-backed terrorists opened fire on them.

The Tripura CM and the minister also expressed deep sympathy towards the bereaved family of the martyred CRPF man.