After visiting a senior citizen Aparna Chowdhury’s house in Agartala’s Dhaleswar area on Sunday, Deb said that he will urge other ministers to try to visit the houses of common people in the state so that they can communicate with them effectively.

Deb tweeted, “From today onwards every common people’s house in #Tripura randomly. It feels great to be among the beloved people of our State. I will urge other leaders and Ministers to try the same and connect with people.”

He also said that he was overwhelmed with the love and hospitality showered on him by Chowdhury’s family members. 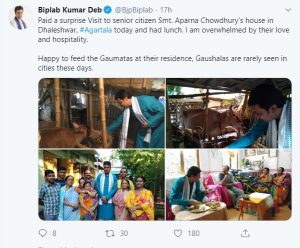 After feasting on a delicious lunch platter at Chowdhury’s house, the chief minister fed the cows in her residence.

Deb said that he is happy to feed the ‘gaumatas’ in their cowshed .

The chief minister claimed that there hardly any ‘Gaushalas’ in Agartala.

It may be mentioned that Deb had also earlier announced that he will try his best means to communicate and reach out the people of the state.

In September this year, Deb had said that he will soon make facilities of setting up Janatar Darbar (public courts) in all districts of the state to establish direct communication with people in order to provide solution to their problems.