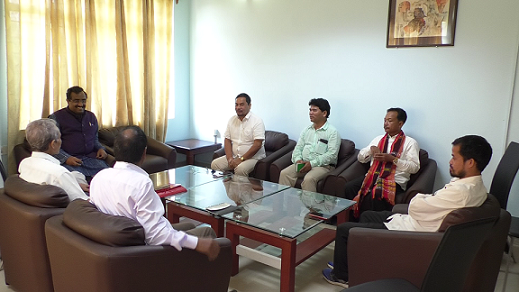 A high-level meeting of the Bharatiya Janata Party (BJP) and its ally, IPFT, was held in Agartala to discuss the forthcoming Lok Sabha election 2019.

At the end of the meeting, BJP national general secretary Ram Madhav said, “In Tripura in the last six months, our Government has taken mostly people-friendly measures. Some of the measures, taken by Chief Minister Biplab Deb during the last six months, have received wide appreciation, especially his fight against narcotics in Tripura has attracted the attention of all the people of the country.”

Stating that the party is happy that the Tripura Government is doing good job for the people of State, Madhav said, “We have taken stock of the progress of our work through the Government and we had a preliminary discussions about the forthcoming parliamentary elections at the party office-bearers’ meeting today.”

When asked if the BJP is contesting both the seats or would leave one for their ally IPFT, which has been its demand, the BJP senior leader said, “The alliance partner has not mentioned anything about the Lok Sabha election at all. The view is that BJP should contest both the seats.”

Issues related to making strategy for the coming parliamentary elections and recent untoward incidents between the BJP and the IPFT (Indigenous Nationalist Party of Tripura) were also discussed.

Speaking in the line of Madhav, BJP national secretary and Tripura central observer Sunil Deodhar said, “We have the Lok Sabha polls ahead and we are not only going to win both the LS seats with a huge margin but also want that the opposition lose its security deposit as they have totally lost their base which was revealed in the results of by-election of the Panchayat where they even could not find candidates to contest.”

However, the IPFT leaders said they did not discuss on seat-sharing and in such a situation, there is all possibility that they would also contest from both the Lok Sabha seats.